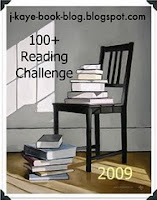 I read 297 books this year. My unoffical goal was 300. I am doing a separate post on my favorites and least favorites for the year. I love this challenge and look forward to doing it in 2010. Thank you J. Kaye of J. Kaye's Book Blog for hosting it. :)

Amazing! I used to read like this, but life with a new baby in the house soon approaching toddlerhood has limited my free time considerably. :)

I'm honored that 1 of my books made your list in May, though. Deceptive Promises. Hope you enjoyed it.

Have a great and successful 2010 with meeting your 300-book challenge. Happy reading!

My eyes just bulged out of my head! How did you read so many books in one year! I read 93 and that is a record for me.

That's amazing!! Like Tiff, my time is limited with a toddler running around, so most of my books I get to read now are for reviews and endorsements only. Thanks for reading my novel Return To Love in July. I am honored. =)

Holy cow! You are my hero!! There will be a giveaway for the participants of this reading challenge at the end of the month. Come by and enter if you'd like.