Echoes of an Angel by Aquanetta Gordon with Chris Macias (Review) 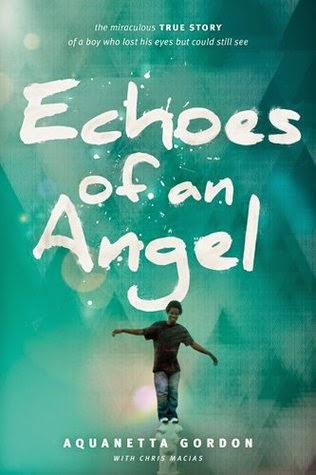 When Ben Underwood became blind at the age of two, anyone would have thought he faced a life full of hardship and uphill challenges—a world full of things he’d never be able to see and activities he’d never be able to enjoy. But as far as his mom, Aquanetta Gordon, was concerned, nothing was impossible for Ben . . . and so he accomplished the incredible. Known as “the boy who could see with sound,” Ben mastered human echolocation—the ability to detect the size, shape and location of objects through the reflection of sound waves. By clicking his tongue and “seeing” the waves, Ben could ride his bike, shoot baskets, identify objects, and even play video games. Some called it a miracle, but to Ben and Aqua, the real miracles were the otherworldly experiences God gave Ben—physical and spiritual—that others couldn’t explain. Echoes of an Angel is the remarkable true story of how a child who seemed destined for darkness brought light to the world. It’s the story of a single mom who encouraged her son to push beyond his limits, even as her heart clenched with protective love and fear. And it’s the story of a family’s unshakable faith . . . in God and each other.

This was the story of Ben Underwood but also his mother, Aquanetta. It was told from her perspective. It seems she was honest in admitting her mistakes including drugs and bad relationship choices. She does not regret any of her children though. Ben was her fourth child and at age two found out he had bad cancer. He ended up having both of his eye balls removed. Aquanetta refused to hinder him by babying him. He developed a remarkable skill called echolocation. This allowed him to do most of the things seeing boys could do. He still had obstacles to overcome which he did with an excellent attitude. Unfortunately his cancer came back when he was a teen. I was so upset when I reached the ending and found out he passed away. I do not remember hearing this story in the news even though it was there. I was inspired by this story, he lived so much life in his 17 years. The only thing I was uncomfortable with was some of the spiritual aspect including him appearing to people after his death.
- August 31, 2014