Beautiful on the Mountain by Jeannie Light (Review) 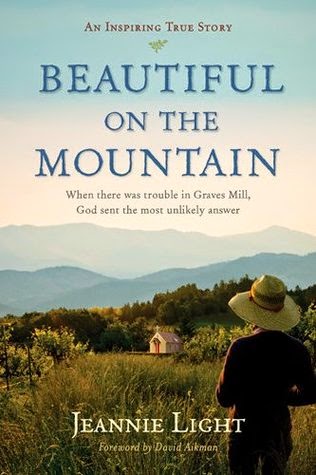 If you enjoyed the classic novel Christy and the bestselling Mitford series, then you’ll love Beautiful on the Mountain, a real-life tale about serving God in unlikely circumstances. In 1977, Jeannie Light left her fine plantation home amid heartbreak and came to Graves Mill, a tiny hamlet in the Blue Ridge Mountains. Alone in an utterly new kind of life, Jeannie was determined to find the courage to make a fresh start.

To Jeannie’s surprise, she found herself called upon by her new neighbors to open the old, deteriorated country church, a place that had once united the fractured community of mountain folk. With no training, and no small amount of trepidation, she undertook the task. And as she embarked on an unforeseen series of adventures, from heartbreaking to hilarious, Jeannie would learn more than she ever expected about faith, loving your neighbor, and doing the work that God sets in front of you. Because sometimes, God calls us to go where there is no path . . . and leave a trail.

This was an interesting memoir. Jeannie Light had a good life living in a big fancy house then husband decided he wanted a divorce. The settlement was a little weird and confusing to me. It was decades ago so I imagine things were different. The book mostly described events occurring 1977 to 1979. The first part focused on how she came to be in Graves Mill. Then how she became involved in the community. Charlie wanted her from the start of her being there to revive the small old country church. It was definitely not something in her plans but God sometimes has other things in store. She starts with a bible study in her little house. One day a big man thundered in and said women were not supposed to be preaching. It shocked everybody there and somehow she ended up leaving for awhile. She went to classes and lived with friends in other towns. She ended up back in Graves Mill because she could not deny her calling to minster to the country people of Graves Mills in Blue Ridge Mountains. In the end the church does get to open back with her as the preacher. There were good descriptions and the book was interesting. If you like these kinds of books then I recommend this one.

Email ThisBlogThis!Share to TwitterShare to FacebookShare to Pinterest
Labels: Beautiful on the Mountain, Jeannie Light