If I Had Lunch With C. S. Lewis by Alister McGrath (Review) 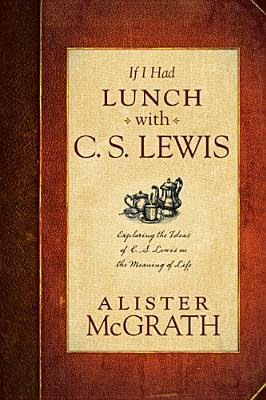 What if you could ask C. S. Lewis his thoughts on some of the most difficult questions of life? If you could, the result would be Dr. Alister McGrath’s provocative and perceptive book, If I Had Lunch with C. S. Lewis. Best-selling author, prominent academic, and sought-after speaker, Dr. McGrath sees C. S. Lewis as the perfect conversation companion for the persistent meaning-of-life questions everyone asks.

What makes Lewis a good dialogue partner is that his mind traveled through a wide and varied terrain: from atheism of his early life to his conversion later in life; from his rational skepticism to his appreciation of value of human desires and imagination; from his role as a Christian apologist during World War II to his growth as a celebrated author of classic children’s literature. The questions Lewis pondered persist today: Does life have meaning? Does God exist? Can reason and imagination be reconciled? Why does God allow suffering?

Let McGrath be your insightful guide to an intriguing conversation with Lewis about the ultimate questions.

This book was hard to read and did not keep my attention. It was not what I expected. There was no dialogue between C. S. Lewis and the author. The whole lunch thing was mentioned at the very beginning and end of each chapter. It was if we were at lunch with C. S. Lewis and asked him this question, this is what he might say. It felt tedious reading it and I barely made it through the whole book. The questions addressed subjects like death, the meaning of life, friendship, faith, learning, and suffering. It also explored some of the Chronicles of Narnia series and what certain things meant in them. I think I would rather read C. S. Lewis's actual books. I have read a few of them. I read this book because I really enjoyed the biography this author wrote last summer on C. S. Lewis. I recommend that book over this one. Also I recommend reading C. S. Lewis's books.


Alister McGrath, one of the world’s leading Christian theologians, is Professor of Theology, Ministry, and Education at King’s College London, and head of its Center for Theology, Religion, and Culture. Before moving to King’s College, he was Professor of Historical Theology at Oxford University and is currently Senior Research Fellow at Harris Manchester at Oxford. Author of C. S. Lewis—A Life, McGrath has a deep knowledge of Christian theology, history, and literature that allows him to interpret Lewis against a broad backdrop, presenting a fascinating portrait of the development of Lewis’s mind and his impact on Western culture.
- August 31, 2014

Email ThisBlogThis!Share to TwitterShare to FacebookShare to Pinterest
Labels: Alister McGrath, If I had lunch with C. S. Lewis