Heart of the Country by Rene Gutteridge and John Ward (Review) 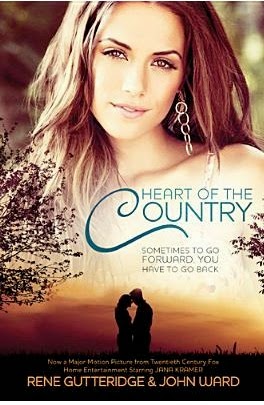 Faith and Luke Carraday have it all. Faith is a beautiful singer turned socialite while Luke is an up-and-coming businessman. After taking his inheritance from his father’s stable, lucrative business to invest in a successful hedge fund with the Michov Brothers, he’s on the fast track as a rising young executive, and Faith is settling comfortably into her role as his wife.

When rumors of the Michovs’ involvement in a Ponzi scheme reach Faith, she turns to Luke for confirmation, and he assures her that all is well. But when Luke is arrested, Faith can’t understand why he would lie to her, and she runs home to the farm and the family she turned her back on years ago. Meanwhile, Luke is forced to turn to his own family for help as he desperately tries to untangle himself from his mistakes. Can two prodigals return to families they abandoned, and will those families find the grace to forgive and forget? Will a marriage survive betrayal when there is nowhere to run but home?

This was an okay Christian fiction book. It is the novelization of a movie coming out with the same name. The story felt awkward and slow. It was told in first person through multiple characters. The book centers around Faith and Luke but Faith's family plays a prominent role. She runs to them after a long time of being away because her husband, Luke, gets in trouble for being part of a Ponzi scheme.  She ran and did not contact him to let him know what was going on with her which did not make sense. When all of Luke's friends and business associates give him the cold shoulder he finally returns to his father for help. Interjected between these chapters are ones told from Faith's dead Mom's point of view when she was dying. It is the story of double prodigals. The plot was interesting but the characters felt a little flat. The end was satisfying and fit the book. I have read other books by Rene Gutteridge and liked them. This was one was just okay.


Rene Gutteridge is the author of nineteen novels including Listen, Possession, Misery Loves Company, the Storm series, the Boo series, the Occupational Hazards series, and the novelization of the movie The Ultimate Gift. Rene and her husband have two children and live in Oklahoma. John Ward has spent twenty-five years in the film industry as a screenwriter, director, and actor. He recently wrote, directed, and starred in the feature film I AM. He also wrote, produced, and directed the Liquid DVD series for Thomas Nelson. He currently serves as president of Bayridge Films.
- August 24, 2014

Email ThisBlogThis!Share to TwitterShare to FacebookShare to Pinterest
Labels: Heart of the Country