The Advocate by Randy Singer (Review) 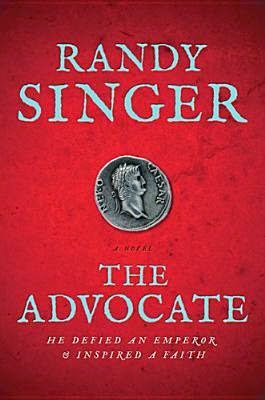 At the trial of Christ, Theophilus, brilliant young assessore raised in the Roman aristocracy, stands behind Pontius Pilate and whispers, “Offer to release Barabbas.” The strategy backfires, and Theophilus never forgets the sight of an innocent man unjustly suffering the worst of all possible deaths—Roman crucifixion.

Three decades later, Theophilus has proven himself in the legal ranks of the Roman Empire. He has survived the insane rule of Caligula and has weathered the cruel tyrant’s quest to control the woman he loves. He has endured the mindless violence of the gladiator games and the backstabbing intrigue of the treason trials.

Now he must face another evil Caesar, defending the man Paul in Nero’s deranged court. Can Theophilus mount a defense that will keep another innocent man from execution?

The advocate’s first trial altered the course of history. His last will change the fate of an empire.

This is a hard book for me to review. I am not familiar enough with the historical period and details to give an opinion on whether its accurate. I am going to address it as a fully fictional book without analyzing the historical details. It was interesting and kept my attention. One thing that bothered me was the way time was handled. I would finish one chapter and the next would start years later. To me it seemed like the book centered around Theophilus's life more than one trial. The trial of Paul was one little part. Overall it was well written and the characters were mostly well developed. The ending was not nice and sweet. I was reminded that life is like that. I have read some of the author's legal thrillers and enjoyed them. This is his first historical book. I think although this could have been a shorter book it was a good first.


Randy Singer is a critically acclaimed author and veteran trial attorney. He has penned nine legal thrillers, including his award-winning debut novel "Directed Verdict." In addition to his law practice and writing, Randy serves as a teaching pastor for Trinity Church in Virginia Beach, Virginia. He calls it his "Jekyll and Hyde thing"--part lawyer, part pastor. He also teaches classes in advocacy and ethics at Regent Law School and serves on the school's Board of Visitors. He and his wife, Rhonda, live in Virginia Beach. They have two grown children. Visit his Web site at www.randysinger.net.

Review copy provided by publisher in exchange for an honest review.
- August 30, 2014

Email ThisBlogThis!Share to TwitterShare to FacebookShare to Pinterest
Labels: Randy Singer, The Advocate