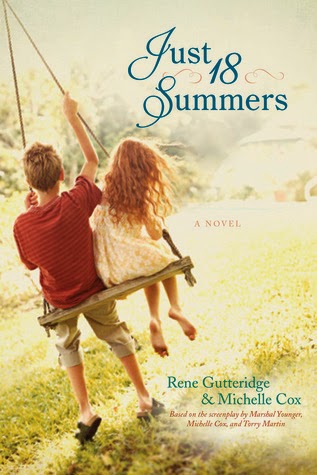 After the tragic death of Butch Browning’s wife, Jenny, four families begin to realize how precious—and fleeting—their time together is. Each is at a different stage in life: Butch is facing single parenthood. The O’Reillys are expecting their first child. The Andersons are approaching an empty nest, and the Buckleys are so focused on providing their children with everything that they’ve forgotten what they truly need. With just eighteen summers before their children are grown, how do they make the most of that time when life so often gets in the way?

As summer flies by, each of these parents must learn about guilt and grace . . . and when to hold on to their kids and when to let go.
My Review:

This was a touching Christian fiction book about how fast children grow up. One of the big themes of course is  parents only have 18 summers with their children and should make the most of it. The book was told from several different people. I liked how the male and female perspectives were both represented. The chapters would alternate but their lives all overlapped in some way. I felt the emotions in the book. Some parts were sad, some happy, and most poignant. These are everyday families readers can relate too. I enjoyed reading it and I have no children. I have much loved cousins though; one of whom is graduating high school this year. Recommended.
Rene Gutteridge is the award-winning and best-selling author of more than eighteen novels, including the beloved Boo Series and Heart of the Country, her novelization release with director John Ward and Tyndale House Publishers. Her recent suspense titles include Listen, Possession and the award-winning Seven Hours project Escapement. She's been published by Bethany House, Tyndale House, WaterBrook Press, Thomas Nelson and B&H and novelized the successful motion picture The Ultimate Gift. She is teaming again with screenwriter Cheryl McKay for the romantic comedy Greetings from the Flipside from B&H and releasing her new suspense title, Misery Loves Company from Tyndale in 2013. Her romantic comedy Never the Bride won the 2010 Carol Award for Best Women’s Fiction. Her upcoming literary projects include the novelization of the motion picture Old Fashioned with Tyndale House Publishers and filmmaker Rik Swartzwelder.
- August 22, 2014