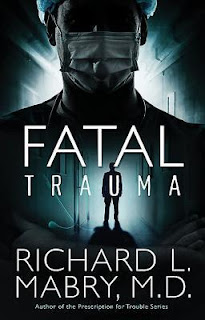 It began with Dr. Mark Baker facing a gunman who had nothing to lose. It could end with him behind bars.

In the Emergency Room, Dr. Mark Baker and Nurse Kelly Atkinson stand at the mercy of a gunman who declares, "If he dies, everyone here dies." At the end of the evening three men lie dead. One of them is a police officer Mark and a surgeon, Dr. Anna King, couldn't save. The other two are members of the feared Zeta drug cartel, and their threat of revenge puts the lives of Mark, Kelly, and others at risk.

It isn't long before the shootings begin, and Mark finds himself under suspicion as a killer, yet still a potential victim. Because of Kelly's growing love for Mark, she is hurt when he turns to his high school sweetheart, now an attorney, for help.

Who is the shooter? And can Mark find out before he becomes the next victim?

I did not enjoy reading this book as much as previous books by this author. For some odd reason I did not connect with the characters. They felt flat and underdeveloped. The book plot itself was good. The premise was interesting. The faith element was there. The romance was just okay. I did not feel it. The suspense/mystery part was okay. It did not hold my attention all the way through like his books normally do. I did appreciate the twist at the end. The conclusion did tie the book up perfectly. I really do like this author's works. I suggest a new reader start with the Prescription for Trouble series. It is one of my favorites for the genre.

I'm a retired physician, who got into non-medical writing after the death of my first wife with my book, THE TENDER SCAR: LIFE AFTER THE DEATH OF A SPOUSE. I'm gratified that it continues to help those who have lost a loved one.


Review copy provided by Litfuse Publicity in exchange for an honest review.
- June 20, 2015 No comments:

The Proposal at Siesta Key by Shelley Shepard Gray (Review) 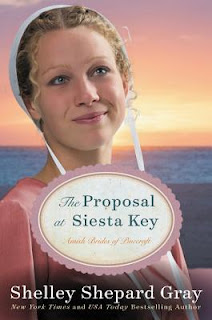 Penny Troyer rarely disobeys her parents. In the years since her sister’s tragic death, they’ve wanted nothing more than to keep her safe…even if it means never leaving the house.
But tonight, she’s bending the rules because Michael Knoxx, the most famous member of The Knoxx Family Singers, a traveling Mennonite Evangelical family —is scheduled to speak. Penny has heard of Michael—how he lost part of his leg in a terrible accident and uses the experience to inspire others—and knows she must meet him. So, for the first time ever, Penny stands up to her parents and goes out on her own.

Though he speaks about living life to the fullest, Michael knows he needs to take his own advice. Life on the road is grueling and Michael wants to slow down, to rest…to perhaps meet someone who sees him as a man, not just a celebrity. So when a twist of fate allows him the chance to stay a little longer in Pinecraft, Michael knows God is showing him a new path, especially when he discovers how much he and Penny Troyer have in common.

But new friendships can’t stop time. Soon, Michael's time in Pinecraft will be over and he'll be back on the road. Her time with Michael has brought her happiness, but will she be able to follow her heart? Or will she be faced with the one thing she’s sure she'll never have the courage to do?

I enjoyed reading this Amish fiction book. This is the second book in the Amish Brides of  Pinecraft series but can stand alone. I loved the setting. Pinecraft is a special area in Sarasota, FL, where the Amish go to vacation. The beach nearby is Siesta Key. The main characters in this book are Penny Troyer and Michael Knoxx. She is Amish while he is Mennonite. They meet walking down the street and at his concert. He is part of the Knoxx family and they travel around giving speeches and concerts. He lost part of his leg in an accident and uses his story to inspire others. Penny is grown but stuck at home being treated like a child by her parents. After losing a sibling when she was younger her parents are overprotective and will not let her do anything.  Penny and Michael have a chance to get to know each other better when Michael has to have surgery and is stuck in Pinecraft for weeks. Penny gets hired at the local bed and breakfast and ends up helping take care of him. They develop a close friendship and talk about a lot of different things. I like how he tells her to make the most of each day. The characters and plot were unique and well developed. It held my attention from the beginning and I could not stop reading.  It was a somewhat light but good book. And I really want to go to Pinecraft now. :) Highly Recommend both books in the series. This is one of my favorite authors and I have read most of her books.

Review copy provided by Litfuse in exchange for an honest review.
- June 12, 2015 No comments:

Who's the New Kid by Heidi Bond and Jenna Glatzer (Review) 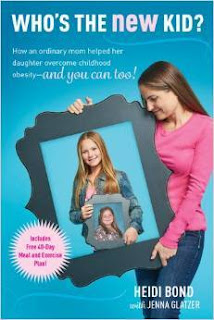 At nine years old, Breanna Bond weighed a whopping 186 pounds. Just walking up the stairs to her room was a challenge. Her legs chafed to the point of bleeding from rubbing against each other, and her school days were filled with taunts of “Hey, Fatty!” Breanna’s mom, Heidi, was devastated and wondered, How can I get my daughter healthy again?

Who’s the New Kid? shows readers how Heidi helped her daughter lose weight without the aid of fad diets, medication, or surgery and how other parents can do the same with their kids.

In just over a year, Heidi’s plan worked! Breanna dropped 40 percent of her body weight and was transformed from a morbidly obese child who spent her days in front of the TV eating chips and chocolate to a vibrant, healthy, energetic little girl.

Filled with helpful diagnostic tools, easy-to-make recipes, eye-opening nutritional information, fun exercise ideas, and practical tips and advice, Who’s the New Kid? will not only show parents how to help their kids lose weight naturally but also introduce them to simple, yet effective lifestyle changes that will benefit the entire family.

This was an interesting non fiction book about how one mother helped her young daughter beat obesity. The book was well written and flowed well. The subject matter made me hurt for Breanna. It is not easy being the so called fat kid. I have never dealt with it personally as a child but I gained a lot of weight in college. I changed my life by exercise and eating better. I was inspired that her Mom helped her and did not give up. I felt her frustration. I was a little upset it took so long for her to figure out where the problems were and what to do to fix it. I do not agree with the menu plan in the back though. I eat the Primal Life style. The story part I found okay but I would not use the meal plans even for children.

Review copy provided by Litfuse in exchange for an honest review.
- June 09, 2015 No comments: