The Midwife by Jolina Petersheim (Review) 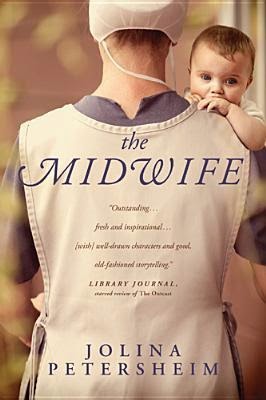 The story about a mother who risks everything to save a child not genetically hers . . .

The Past -- Graduate student Beth Winslow was sure she was ready to navigate the challenges of becoming a surrogate. But when early tests indicate possible abnormalities with the baby, Beth is unprepared for the parents' decision to end the pregnancy -- and for the fierce love she feels for this unborn child. Desperate, she flees the city and seeks refuge at Hopen Haus, a home for unwed mothers deep in a Tennessee Mennonite community.

The Present -- As head midwife of Hopen Haus, Rhoda Mummau delivers babies with a confident though stoic ease. Except in rare moments, not even those who work alongside her would guess that each newborn cry, each starry-eyed glance from mother to child, nearly renders a fault through Rhoda's heart, reminding her of a past she has carefully concealed.

Past and present collide when a young woman named Amelia arrives in the sweeping countryside bearing secrets of her own. As Amelia's due date draws near, Rhoda must face her regrets and those she left behind in order for the healing power of love and forgiveness to set them all free.

This was an interesting book. It is fiction told mostly through first person. I was a little confused, in the beginning especially. The plot felt choppy. Beth and Rhoda are the same person and Amelia is the daughter she had to give back. In her past Beth was a graduate student when she agrees to be a surrogate for one of her professors. When they want to get rid of the baby because a doctor tells them it might be defection Beth runs and ends up at Hopen Haus. She gives birth and names the baby Hope. The couple finds her and takes back the baby. Fast forward to present day and Rhoda/Beth runs Hopen House. Amelia shows up pregnant needing a place to stay. The last part of the book is the best. The ending is explosive. There is a subplot involving one of the other girls in the house too. Overall this was an okay book.


Jolina Petersheim is the bestselling author of The Midwife and The Outcast, which Library Journal called "outstanding . . . fresh and inspirational" in a starred review and named one of the best books of 2013. She holds degrees in English and communication arts from the University of the Cumberlands, and her writing has been featured in venues as varied as radio programs, nonfiction books, and numerous online and print publications. Her blog is syndicated with The Tennessean's "On Nashville" blog roll, and she also blogs weekly with nine other bestselling authors at Southern Belle View. Jolina and her husband share the same unique Amish and Mennonite heritage that originated in Lancaster County, Pennsylvania, but now live in the mountains of Tennessee with their young daughter. Follow Jolina and her blog at jolinapetersheim.com
- August 30, 2014

Email ThisBlogThis!Share to TwitterShare to FacebookShare to Pinterest
Labels: Jolina Petersheim, The Midwife