The Swiss Courier by Tricia Goyer and Mike Yorkey 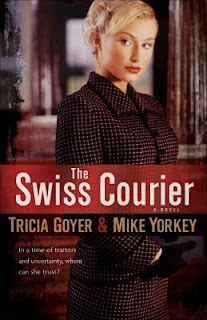 About the book
It is August 1944 and the Gestapo is mercilessly rounding up suspected enemies of the Third Reich. When Joseph Engel, a German physicist working on the atomic bomb, finds that he is actually a Jew, adopted by Christian parents, he must flee for his life to neutral Switzerland. Gabi Mueller is a young Swiss-American woman working for the newly formed American Office of Strategic Services (the forerunner to the CIA) close to Nazi Germany. When she is asked to risk her life to safely "courier" Engel out of Germany, the fate of the world rests in her hands. If she can lead him to safety, she can keep the Germans from developing nuclear capabilities. But in a time of traitors and uncertainty, whom can she trust along the way? This fast-paced, suspenseful novel takes readers along treacherous twists and turns during a fascinating--and deadly--time in history.

About the authors:
Tricia Goyer is the author of several books, including Night Song and Dawn of a Thousand Nights, both past winners of the ACFW's Book of the Year Award for Long Historical Romance. Goyer lives with her family in Montana. To find out more visit her website: http://www.triciagoyer.com/Mike Yorkey is the author or coauthor of dozens of books, including the bestselling Every Man's Battle series. Married to a Swiss native, Yorkey lived in Switzerland for 18 months. He and his family currently reside in California.To find out more visit his website: http://www.mikeyorkey.com/

CONTEST
(and this includes CHOCOLATE!)
Pst...pass it on! Help Spread the word about #SwissCourier on Twitter and enter to win a signed copy & Swiss Chocolate!
Just tweet this: The Swiss Courier by @triciagoyer fast paced and suspenseful! Don't miss out! http://tr.im/Ahjs RT #swisscourier and we'll enter you into a drawing for 1 of 5 SIGNED copies of The Swiss Courier!

This sounds like a great book! Do you know when they are having this drawing? I've seen this retweet a few times but was wondering when this ends.

Thanks for having me here!

I have read many excellent reviews of this book...I know I will enjoy reading it...thanks for the opportunity.

As the co-author of "The Swiss Courier," it was great to see all the enthusiasm for our World War II-era thriller. Readers have been telling us that we've been keeping them up late to finish the last 50 pages.No one has been able to figure out how "The Swiss Courier" ends yet, so there are some great surprises. Thanks again. Mike Yorkey