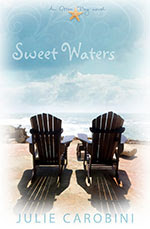 About the Book:
There’s nothing left for Tara Sweet in landlocked Dexton, Missouri. Her fiancé called off their wedding, her sister is moving to Manhattan, and now her mother is marrying a much younger man with plans for a yearlong honeymoon in Europe. Tara believes a move back to her childhood home of Otter Bay, California, will help restore the fun and fearlessness she’s already missing in her twenties. Playing back memories of idyllic times spent there with her father along the majestic coast, a fairytale seems just around the corner.
Better make that a soap opera. After Tara finds a job in Otter Bay, makes friends at The Red Abalone Grill, and perhaps even a new flame in firefighter Josh, she begins to uncover shocking secrets about why her family left this heaven on earth all those years ago. And though she will have to question everything she has ever known, the faith that Tara must depend upon will be sweeter than ever before.

My Review:
Sweet Waters is Julie Carobini's third novel and she gets better with each one. This is the first in the Otter Bay series set in California. I read the book on my way to Gulf Shores, AL, last month but it is more than just a beach lit novel. It is hard to put it in one category. Anyway I loved the development of the characters as the book progresses and the light spiritual aspect in some of the characters lives. The author's descriptions make you feel like you are right there. My only gripe is the beginning felt a little slow but then the overall pace of the book is not fast. It is a book to be read and taken in slowly. So it is a sorta chick beach woman lit with a little romance. I look forward to rereading it and not just in the summer. I think it can be read and enjoyed any time of year. Recommended.


About the Author:
Julie Carobini is a self-described “beach-lit” novelist who writes women’s fiction for the young at heart. Her previous books include Chocolate Beach and Truffles by the Sea. She has also published articles in Aspire, Decision, Expecting, and Focus on the Family magazines and received awards for her fiction and nonfiction from the National League of Pen Women. Julie lives with her husband, Dan, and their three children in Ventura, California.
- October 09, 2009