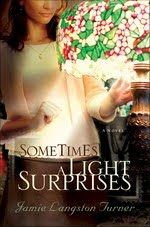 He had drawn the curtains tightly around his soul...could he trust that glimmer of hope quietly beckoning to him?

Ben Buckley has never gotten over the loss of his wife. More bewildering than the mystery surrounding her death is the radical change that occurred in her shortly beforehand--a "conversion," she had called it. Baffled, angry, and still feeling guilty for the way he'd withdrawn from her during those final weeks, Ben now lives behind the protective walls of severed relationships and rigid routines.

An unlikely young woman knocks on the door of his narrow world. Her simple honesty and childlike faith are incomprehensible to him, but in spite of his misgivings Ben finds himself on a journey he never would have begun on his own.

My Review:
This is my first Jamie Langston Turner book so I did not know what to expect. The story moved a little slow in parts and skipped around a little. It was told from 4 characters viewpoints. The four main characters were Ben the widower, Caroline his secretary, Erin his daughter, and Kelly a conservative young christian Ben hired as a designer for his company. The story moves around from all of their first person narratives. There were other characters involved of course. The main plot line is Ben and his dysfunctional family. When his wife died more than 20 years ago he let his mother move in and do the raising so although he was there he really neglected them. It hurt them especially Erin. His daughter Shelly starts trying to get the family together more often and mend things. Ben reluctantly participates. Ben is a very solitary person and he often quotes or explains unusual sayings. It can be a little annoying but I also learned things I did not know. Caroline is a little obsessed with the old murder case of Ben's wife and really has a limited life. Ben hires Kelly to see what she is like because her mother is the one who helped convert his wife to Christianity a few months before she died and caused conflict in their marriage. She turns out to be a little like he expected but in other ways not. Overall this is an enjoyable story. I would be interested in another book featuring the same characters.

Thank you Bethany House Publishers for my review copy.
- November 12, 2009

Hello Brittanie – I hope you don’t mind me dropping by. I’m a British author and a fellow Bookblogs member and my next novel, Thaw, will be published online next year after its physical publication. I wanted to invite you (and your readers) to participate in my Blogsplash - there’s more information at http://www.fionarobyn.com/thawblogsplash.htm. Thanks for listening!