***Leave a comment before Sunday November 15 at midnight to be entered to win a copy.*** 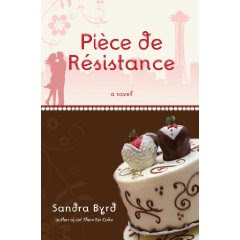 Book description:
Having earned her chef's hat, Lexi Stuart bids au revoir to her glamorous and deliciously satisfying pastry mentorship outside of Paris and returns to her hometown of Seattle, Washington. There, she finds life unexpectedly complicated.

She's put in charge of a high end catering bakery Bijoux, which should be her dream job, but there's a catch: She has to make this lavish bakery into a successful business in just a few short months, which will require more than her ability to make an amazing wedding cake. In over her head and at a loss for creative marketing ideas, Lexi isn't sure what the recipe for success needs to be.

Stir in a complicated relationship with her French beau, Philippe, and his daughter, Celine, then add a dash of romance with down-to-earth, lawyer Dan, and life suddenly contains more ooh la la than Lexi can handle.

With the fate of her career and her love life hanging by a thread, the phrase "piece of cake" has never been more daunting. Lexi learns that she must trust the dreams in her heart and the God who put them there.

My Review:
This is the third and last book in the French Twist series by Sandra Byrd. I love this series. I am so sad to see it end. I recommend reading them in order plus they are so good you will want to read all of them. The main character Lexi has grown so much since the start of the first book. There is a spiritual aspect to the series but it is never preachy to me. It just flows along with the rest of the story. They are well written with fabulous food descriptions. I love to bake and every time I read one it makes me want to bake and eat. Highly recommended. :)
About the Author:
Sandra Byrd is a best-selling author of books for adults, teens, and children. Her notable series include the Friends for a Season series, the Secret Sisters series and the French Twist series, which includes the first two Lexi Stuart novels, the Christy Finalist Let them Eat Cake and its sequel, Bon Appetit. A regular contributor to newspapers and magazines, Sandra lives in Washington state with her husband and two children.
Visit the author’s website.
To Order from Amazon
- November 08, 2009

Too true! This was a dangerous series for me to read because I always landed in the kitchen.

I read the first book, and would love to know what happens in the end. Please include me in the giveaway. Thanks. gasweetheart211[at]netscape[dot]net

I would love to read this book. Sounds wonderful!!

I would love to read this book...thanks for the opportunity.