M. L. (MARYLU) TYNDALL grew up on the beaches of South Florida loving the sea and the warm tropics. But despite the beauty around her, she always felt an ache in her soul--a longing for something more.

One day, she picked up her old Bible, dusted it off, and began to read. Somewhere in the middle, God opened her hardened heart to see that He was real, that He still loved her, and that He had a purpose for her life, if she'd only give her heart to Him completely.

Her current releases in the Legacy of The Kings Pirates series include:The Restitution, The Reliance, and The Redemption and The Falcon And The Sparrow 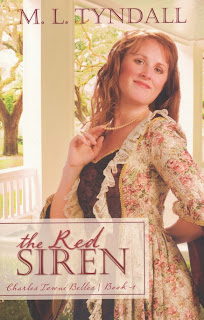 Lady Faith Westcott has turned her back on God and on man. Having witnessed the hypocrisy in the Church of England, her older sister's abuse at the hand of her husband, and her own mother's untimely
death in childbirth, Faith has determined never to marry and to gain enough wealth so she and her two sisters will never have to depend on man or God again.

To that end, though a lady by day, she becomes a pirate by night and begins her sordid career off Portsmouth when she attacks and plunders a merchant ship commanded by the young Dajon Waite. Humiliated at being defeated by a pirate and a woman no less, Dajon returns home without cargo and ship, and his father expels him from the family merchant business.

After a brief sojourn into debased society, Dajon rejoins the Royal Navy, where he finds comfort in the strict rules and redemption through his service to others. Three years later, he is sent to the frontier outpost of Charles Town, South Carolina to deal with the pirate problem. There, he connects with his mentor and old friend, Admiral Westcott, who has just arrived with his three daughters.

Much to Dajon's utter dismay, Admiral Westcott, who is being called away to Spain, asks Dajon to be temporary guardian of his three lovely daughters. One of the ladies seems familiar to him, a striking redhead who immediately sends his heart thumping.

Faith recognizes Captain Waite as the buffoon whose ship she plundered off Portsmouth. Yet, he appears no longer the fool, but instead a tall, handsome and commanding naval officer. Despite her immediate attraction to him, she labels him the enemy, but sparks are guaranteed to fly during the next few months when independent, headstrong and rebellious Faith falls in love with God-fearing honorable, rule-following Dajon-especially when Faith continues her pirating off the Carolina coast while her father is away.

Will Dajon catch her? And what will this man of honor and duty do when he does?


If you would like to read the first chapter of The Red Siren, go HERE

My Review: I read this book in one sitting. It is very engaging. I enjoyed the plot line. A female pirate! It is an interesting story plot and character wise. Recommended.

I loved reading the author's bio as much as the review! She sounds like an interesting person.