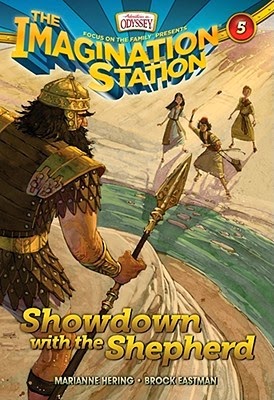 The key to adventure lies within your imagination! Cousins Patrick and Beth go to the Holy Land in the tenth century BC. Their goal is to get back the ring Hugh stole and return him to 1450s England where he belongs. But troubles await them as soon as they step out of the Imagination Station. First they meet an angry bear and later an angry giant. Set against the backdrop of the David and Goliath story, the cousins learn that having a giant faith is more important than having a giant on your side.

My Review:
This was another good book in the Imagination Station series. Patrick and Beth are two children who live in the town of Whit's End. They visit an ice cream shop and the owner is an inventor. He lets the children use the imagination station machine to go on travels. It is always a lesson. This particular book the children are thrown into the story of David and Goliath. There is action, adventure, and a good story. Christian boys especially would like this one.
- June 29, 2014