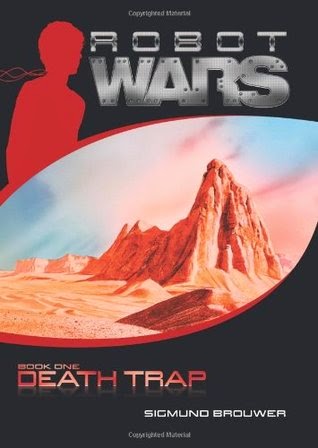 Set in an experimental community on Mars in the year 2039, The Robot Wars series features 14-year-old virtual reality specialist Tyce Sanders. Life on the red planet is not always easy, but it is definitely exciting. Tyce finds that the mysteries of the planet point to his greatest discovery—a new relationship with God. He talks about his growing faith and curiosity in a manner that kids can relate to as they are probably wondering some of the same things. Each book contains two exciting adventures. In the first adventure, the Mars project is in trouble and only Tyce holds the key. In the second adventure, Tyce has discovered there may be killer aliens on the loose.

Robot Wars is a repackaged and updated version of Mars Diaries. There are now five books in the series; each book contains two stories. These new books contain a foreword about how far science has brought us.

I really enjoyed reading this young teen Christian sci fi book. It was previously published as the Mars Diaries. Tyce is a loveable hero. He is in a wheelchair living on Mars. He has been told it is from complications at birth but he makes the best of it. There are no other kids his age at the experiment so he befriends the Doctor who helps him with virtual reality training. His mom is a scientist and his Dad a space shuttle pilot. He does not really feel connected to him because hes only on Mars every three years. There are two adventures in this book. They are both good and keep you turning pages to find out what happens. I think young boys would really like this series. It has action, good characters, and a good message. Recommended.


Whether writing youth or adult fiction, Sigmund Brouwer is a best-selling author of more than 40 fast-paced novels. He loves going to schools to get kids excited about reading, reaching roughly 80,000 students a year through his Rock&Roll Literacy Show.