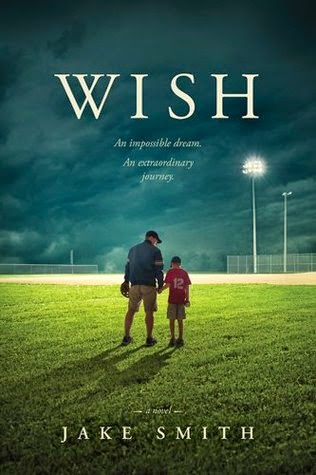 James McConnell’s one wish is that his nine-year-old son will finally be healthy enough to play a game of catch. Then he and his wife, Emily, receive news they’ve dreaded: Aaron’s cancer has relapsed.

As the family steels themselves for a draining treatment regimen in yet another hospital, Aaron receives the gift of a lifetime—a personal visit from one of his favorite professional baseball players—and the chance to make a bold request, his wish: to see his dad play in one major league game.

A former college standout, James fears he doesn’t have the talent it takes, even for one game, and that he’ll miss what could be Aaron’s precious last weeks. Yet how can he refuse his dying son’s wish?

Poignant and triumphant, Wish is the story of a father’s love, a family’s perseverance, and the miracles that can happen when you believe in the impossible.

This was a touching contemporary fiction story. The McConnell family has faced their son Aaron's cancer down before. When it comes back they are devastated. James used to be a baseball player and now he is a coach. Aaron has never been able to play but keeps up the stats and his favorite team the Tigers. While Aaron is in the hospital receiving treatment one of his favorite baseball players comes to visit. Aaron whispers a wish in his ear that no one hears. He wants his father to be able to play professional ball again. His wish comes true when he is allowed to play for a few weeks. The catch his has to prove himself in the training sections before he can play with the Tigers. I like how the book does not make everything go perfect. The characters and plot were well developed. The ending left me chewing my nails and staying up late to finish. Recommended to fans of contemporary books with a baseball theme.


Jake Smith is the editor of three national, award-winning bimonthly magazines. He has also written several outdoor and dog-training books and published more than 150 articles in national outdoor magazines. A former assistant high school baseball coach and All-State high school shortstop, Jake now spends his time on the field helping coach his kids' youth baseball teams. While researching Wish, Jake talked with current and former Major League Baseball players, children's hospital administrators, pediatric oncologists, and families who fought against childhood leukemia and other illnesses. Their expertise, along with tours of C. S. Mott Children's Hospital in Ann Arbor, Michigan, Helen DeVos Children's Hospital in Grand Rapids, Michigan, and "behind the scenes" of Comerica Park (home of the Detroit Tigers) and Fifth Third Ballpark (home of the West Michigan Whitecaps), provided the basis for Wish. Jake hopes this novel will help support children's hospitals, patient and family foundations, and participation in the National Marrow Donor Program's bone marrow registry (www.bethematch.org). Jake holds both B.S. and M.S. degrees in wildlife sciences and management and lives in Traverse City, Michigan, with his wife, Vickie, their three children, and their Labrador retriever. Visit him online at www.jakesmithbooks.com.