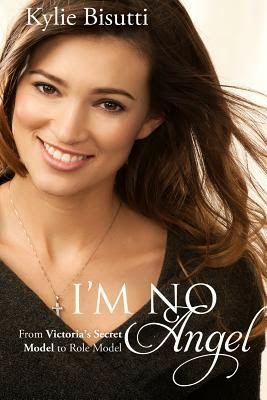 In December 2011, 21-year-old Victoria’s Secret Runway Angel Kylie Bisutti stunned the fashion industry when she chose faith over fame and fortune and made the switch from supermodel to role model.

In I’m No Angel, Kylie shares her story—from her early years as she struggled to make it big in the cutthroat world of modeling, to her “big break” winning the Victoria’s Secret Runway Angel competition, to the disillusionment and spiritual warfare that followed. After finally realizing that she could no longer reconcile her career with her Christian beliefs, she surrendered her life to God and dedicated her life to preaching a message of modesty and inner beauty.

Along the way, Kylie talks about her personal struggles with inadequacy, low self-esteem, and her near-constant quest for approval in a world where you can never be thin enough, pretty enough, or sexy enough. She helps readers understand that true beauty lies within and that real fulfillment comes from knowing, loving, and serving Christ.

This was an interesting memoir. It was well written and easy to read. It held my attention from beginning to end. Kylie gives us a behind the scenes look at the modeling industry from childhood to grown up. It was nothing that shocked me but parts of it were still sad. Kylie was born into a blue collar loving home. She started modeling at 14. She became a Christian when she was a freshman in high school. She tells of her struggle to hold her values while climbing the modeling ladder. In the end when she reached the top she could not justify it to herself or God anymore. She knew her actions were not honoring Him or her new husband. She left that world and wants to spread the message of self acceptance and modesty and her faith in God. Recommended.


Kylie Bisutti was just nineteen years old when she beat out more than ten thousand other contestants to win the coveted title of Victoria’s Secret Runway Angel as part of a nationally televised competition that captivated the attention of millions of viewers across the country and around the world.
Shortly thereafter, Kylie shocked both fans and critics when she made the controversial decision to walk away from her high-profile, multimillion- dollar career because she couldn’t reconcile modeling lingerie with her Christian beliefs.
Now retired from modeling, Kylie has become a sought-after speaker, sharing her message on the importance of modesty and helping young women understand that true beauty comes from within. Her firsthand accounts of the harsh realities of the modeling industry and the truth behind the images the media presents as “feminine perfection” have captivated audiences the world over and have the power to forever change the way women view the media, the modeling industry, and themselves.
Kylie lives in northern Montana with her husband, Mike.
- June 18, 2014