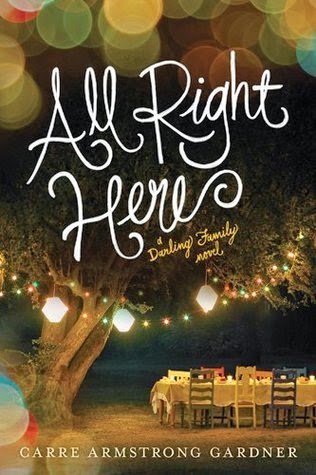 Ivy Darling can’t have children of her own, and her husband Nick’s resentment is forcing them apart. And while Ivy has the support and love of her large, close-knit family, Nick’s family has never welcomed her into the fold.

When the three children next door are abandoned by their mother, Ivy and Nick take them in for the night. One night becomes several, and suddenly Ivy and Nick find themselves foster parents to the only African-American kids in the town of Copper Cove, Maine. As Ivy grows more attached to the children, Nick refuses to accept their eclectic household as a permanent family. Just as Ivy begins to question whether or not she wants to save her emotionally barren marriage, Nick begins to discover how much Ivy and the children mean to him. But is his change of heart too little, too late?

I thought this was a good Contemporary Christian book. It was touching and heart wrenching at times. The characters and plot were well developed and interesting. It held my attention from the beginning to end. This is the first book in a series about the Darling family. This book mainly focuses on Ivy and Nick. They have a difficult marriage compounded by the fact they cannot have children. Then the three African American children next door are abandoned. They are neglected and need care and attention that Ivy has in abundance. It is difficult at times to have a multi racial family in a mostly white town. Ivy's family welcomes them with open arms while Nick's family turns their noses down on them like they do Ivy. I love the day to day stuff the author put in that makes it feel real. Nick takes longer to warm up to the children but does take care of them. It seems like Nick and Ivy's relationship will never be what it should and never has been. The ending is satisfying. This was a great book and had several ups and downs. Ivy's sister with a drinking problem is the likely character for the next book. I can't wait to find out what happens with her. Highly Recommended.

Carrie writes from the big small town of Portland, Maine, where she's the mom of 3 teenagers and 2 dogs she would rather not own. (Only the dogs, not the teenagers.) From 2007 to 2010, she and her family lived in Russia, studying the language and doing humanitarian work.

Like most writers, Carre grew up with her nose in a book. The heroines who most informed her were smart, creative, independent thinkers like Anne Shirley, Laura Ingalls Wilder, Nancy Drew, and Cherry Ames. Nancy proved that being a girl detective might just be the coolest career ever, but Cherry taught her that nursing was more practical. Carre compromised by becoming a nurse and marrying a sleuth.

Nearly every flat surface in Carre's home has books on it. The stories she loves most are those about the ordinary lives of ordinary people; she thinks of every life as a fascinating drama. Isn't each one of us the hero of our own story? She'd love for you to drop her a line and tell her yours!

Review copy provided by publisher in exchange for an honest review.
- June 30, 2014

Read this page? You will not be disappointed.