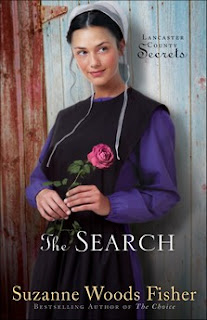 
Fifteen years ago, Lainey O'Toole made a split-second decision. She couldn't have known that her choice would impact so many.

Now in her mid-twenties, she is poised to go to culinary school when her car breaks down in Stoney Ridge, the very Amish town in which her long-reaching decision was made, forcing her to face the shadowed past.

Bess Reihl is less than thrilled to be spending the summer at Rose Hill Farm with her large and intimidating grandmother, Bertha. It quickly becomes clear that she is there to work the farm--and work hard. The labor is made slightly more tolerable by the time it affords Bess to spend with the handsome hired hand, Billy Lapp. But he only has eyes for a flirty and curvaceous older girl.

Lainey's and Bess's worlds are about to collide and the secrets that come to light will shock them both.

"Beautifully written, 'The Search' is a skillfully woven story that takes readers through unexpected twists and turns on the long country road toward truth. Fans both old and new will find themselves immersed in this heartwarming--and surprising--tale of young love, forgiveness, and coming to grips with the past."


This is the third book in the Lancaster County secrets series. It can stand alone but I have enjoyed the whole series. Book two is actually my favorite although this one is good too. The only thing that annoyed me is Bertha changes or messes up the phrase or word often. It is played off as being cute but I did not like it. I was touched by Lainey's story. I liked how the characters all developed and grew throughout the story in particular Bess. There are a couple romantic plot lines that go on but I do not want to spoil anything so I am not giving away any details just to say I liked them. It is an Amish story and follows the pattern for the most part. The characters were still interesting and the writing was good. I recommend the entire series. :)

There is a great contest (Ipad) but I can't get my html to work. You can click here for the details:


In no particular order, Suzanne Woods Fisher is a wife, mother, writer, lifelong student of the Bible, raiser of puppies for Guide Dogs for the Blind, a gardener and a cook...the latter two with sporadic results.


Suzanne has loved to write since she was a young teen. After college, she started to write for magazines and became a contributing editor for Christian Parenting Today magazine. Her family moved to Hong Kong for four years, just as the internet was developing, and she continued to write articles in a 44-story high-rise apartment, sending manuscripts 7,000 miles away with a click of a key.

After returning from Hong Kong , Suzanne decided to give her first novel a try. For four and a half months, she worked on an antediluvian computer in a cramped laundry room. She didn't even tell her husband what she was up to. When the novel was completed, she told her family at dinner one night that she had written a book. "That's why there's no food in this house!" said her slightly insensitive sons.

Undaunted...Suzanne found a small royalty publisher for that book and wrote three more (all earned multiple awards). With help from an agent, she now has numerous books under contract with Revell. Also look for Suzanne's Amish non-fiction, Amish Peace: Simple Wisdom for a Complicated World, a non-fiction book of stories and examples about the Old Order Amish, as well as Amish Proverbs, and coming in Spring of 2011, look for Amish Values for Your Family. The Choice and The Waiting are the previous books in the Lancaster County Secrets Collection.


Writing, for Suzanne, is a way to express a love of God and His word. With every book or article, she hopes readers get a sense of what faith really looks like in the daily grind. She hopes they realize that life can be hard, but God is good, and never to confuse the two.

Suzanne can be found on-line at: http://www.suzannewoodsfisher.com/
Click here to see other stops on the book tour:

http://litfusegroup.com/Blog-Tours/the-search-by-suzanne-woods-fisher.html
Link to buy the book:

Hi Brittanie! Thanks so much for being a part of the blog tour for "The Search." I appreciate your insights and take your comments seriously. Warmly, Suzanne