Ronie has been married since 1990 to a man who can easily be defined in classic terms as a hero. She has four beautiful children. Her eldest daughter is 16 this year, her second daughter will be 13, and her twin boys are 10. After having four children, she finally finished her degree in December 2006. She now has a B.S. in Psychology through Liberty University in Lynchburg, VA. Getting her degree is a huge triumph for both her and her family--they survived!!

This degree has also given her a fabulous perspective on her characters and how to not only make them deeper, stronger, but to make them realistic and know how they'll respond to each situation. Her debut novel, Dead Reckoning released March 2010 from Abingdon Press. And her Discarded Heroes series began in July 2010 from Barbour with the first book entitled Nightshade.

This is the second book in the series. 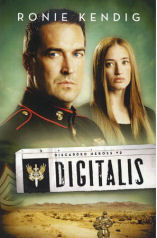 Step into the boots of a former Marine in this heart-pounding adventure in life and love. Colton “Cowboy” Neeley is a Marine trying to find his footing as he battles flashbacks now that he’s back home. Piper Blum is a woman in hiding—from life and the assassins bent on destroying her family. When their hearts collide, more than their lives are at stake. Will Colton find a way to forgive Piper’s lies? Can Piper find a way to rescue her father, trapped in Israel? Is there any way their love, founded on her lies, can survive?

If you would like to read an excerpt of Digitalis, go HERE.

My Review:
I thought this was a good romantic suspense book. It is the second book in the Discarded Heroes series. It can stand alone. The book drew me in and held my attention until the end. Colton and Piper do not have an easy time of it.  Colton is a member of Nightshade, a secret group that performs military like missions under the radar. He does that instead of being in the military anymore because of some serious PTSD. I felt really bad for him especially as he has the flashbacks. The action is great and descriptions seem pretty real. You can tell the author put in a lot of research. The characters feel real and I cared about what happened next. The plot was interesting and definitely unique. I look forward to reading the other team members stories. Recommended. :)
- January 26, 2011