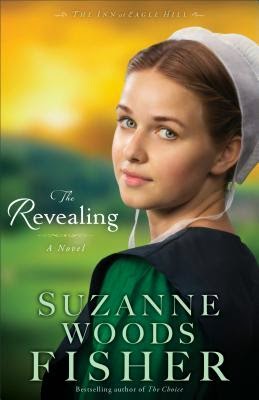 Naomi King, soft spoken, loyal, and easily overlooked, has a gift. She sees what others can't see. Intuition, she calls it. Others in Stoney Ridge don't know what to make of it and dismiss her hunches and inklings altogether.

When a young woman arrives at the Inn at Eagle Hill with a shocking secret about Tobe Schrock, Naomi fears the worst. She can't ignore the feeling that something sinister is at work-- something more than a threat to the tenuous love begun between her and Tobe.

As signs mount, they begin to point to Jake Hertzler, the elusive mastermind behind Schrock Investments' downfall. Soon, events spiral hopelessly out of control and Naomi must decide whether to listen to her head or her heart.

In this riveting conclusion to The Inn at Eagle Hill series, bestselling author Suzanne Woods Fisher pulls out all the stops with a fast-paced tale of deception, revelation, and just the right dose of romance.
My Review:
This is the last book in the Inn at Eagle Hill series. It does not stand alone as it ties up all the ends in the series. I like all the books and think it is a great atypical Amish series. The characters and plot are interesting and unique. I felt like there was a little too much going on in this book. There were many characters and separate but connected plot lines. I wish they could have split this book into two. It was still a satisfying conclusion to the series and ties up all the loose ends. The mystery of the Schrock family and who stole the money; that follows  all the books is finally revealed. I was riveted to the pages reading as fast as I could. Highly Recommend the whole series.
Suzanne Woods Fisher is the bestselling author of The Letters, The Calling, the Lancaster County Secrets series, and the Stoney Ridge Seasons series, as well as nonfiction books about the Amish, including Amish Peace. She is also the coauthor of an Amish children's series, The Adventures of Lily Lapp. Suzanne is a Carol Award winner for The Search, a Carol Award finalist for The Choice, and a Christy Award finalist for The Waiting. She is also a columnist for Christian Post and Cooking & Such magazines. She lives in California. Learn more at www.suzannewoodsfisher.com and connect with Suzanne on Twitter @suzannewfisher
Review copy provided by publisher in exchange for an honest review.
- July 04, 2014

Hi Brittanie! Interesting thought...to split "The Revealing" into two books. My editor might object! :) Thanks for reading the series and writing up a thoughtful review. I appreciate it! Warmly, Suzanne