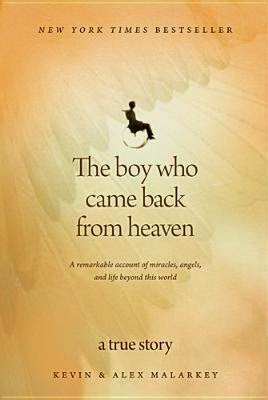 In 2004, Kevin Malarkey and his six-year-old son, Alex, suffered an horrific car accident. The impact from the crash paralyzed Alex—and medically speaking, it was unlikely that he could survive. “I think that Alex has gone to be with Jesus,” a friend told the stricken dad. But two months later, Alex awoke from a coma with an incredible story to share. Of events at the accident scene and in the hospital while he was unconscious. Of the angels who took him through the gates of heaven itself. Of the unearthly music that sounded just terrible to a six-year-old. And most amazing of all . . . of meeting and talking to Jesus. The Boy Who Came Back from Heaven is the New York Times bestselling true story of an ordinary boy’s most extraordinary journey. As you see heaven and earth through Alex’s eyes, you’ll come away with new insights on miracles, life beyond this world, and the power of a father’s love.

I did not like this book. It was not well written at all. I felt alarmed several times throughout the book. It did not ring true. I researched it and Alex himself has said he had nothing to do with the book. He did not help write this book.  His mom, Beth, divorced her husband over what he wrote in the book. The proceeds from the book do not go to Alex. I do not recommend this book. A good lesson is to beware of false truths.


Kevin Malarkey is a Christian therapist with a counseling practice near Columbus, Ohio. He attended the College of Wooster and earned a graduate degree from Ohio State University. He and his ex wife, Beth, have four children (Alex, Aaron, Gracie, and Ryan) and attend a nondenominational evangelical church.
- July 30, 2014

Email ThisBlogThis!Share to TwitterShare to FacebookShare to Pinterest
Labels: The Boy Who Came Back From Heaven by Kevin and Alex Malarkey