All For a Sister by Allison Pittman (Review) 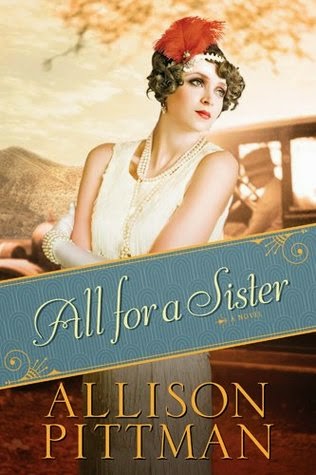 In Hollywood during the Roaring Twenties, Celeste DuFrane has it all. Her father’s work with color movie film opens doors that lead to the stardom she’s always aspired to. But after losing her mother, she discovers that half the estate has been left to a woman accused of killing Celeste’s baby sister before Celeste was even born.

Dana Lundgren arrives on the steps of the DuFrane mansion having spent most of her life imprisoned for a crime that never happened. After accusing her of murder so many years ago, why did Marguerite DuFrane leave her a sizeable inheritance?

As Celeste and Dana learn each other’s stories, they come up with more questions than answers. Then a surprising discovery begins to fill in the missing pieces: Marguerite DuFrane’s written confession, penned shortly before her death. Uncovering the treachery and deceit that changed the course of countless lives—most of all, their own—the two women find more than they ever dreamed of.

I have mixed feelings about the book overall. I thought the story and characters were well written although an odd topic. There was not enough of a faith aspect for me. Marguerite DuFrane is easy to dislike. Dana I felt bad for from the beginning. Celeste gives off the roaring twenties air that makes it hard to really like her even though she really is innocent in the whole mess. She is as much a victim of Marguerite's deceptions as Dana. There is plenty of drama and kept my attention. It is told from Celeste, Marguerite, and Dana's point of views. It cuts from present time to Dana's time in prison to Marguerite's journal to Celeste growing up which can be confusing at times. I like the ending and thought it was satisfying.

As far as I know, I have always been a writer. Before I could put words to page, I would dictate stories to my mother. I have always lulled myself to sleep by crafting stories--a new chapter each night. When God called me to write, I was thrilled to answer His prompting. And so it was, after a long conversation with my husband, I left a 20-year teaching career to pursue a new direction. It called for a HUGE step of faith, but God has kept me and our family safe.

I count every single one of my readers as one of God's blessings in my life, and I like to think of my stories as being the first step in a conversation. Please visit my website, www.allisonpittman.com and send me an email. It is one of my greatest joys to hear from you.

Review copy provided by publisher in exchange for an honest review.
- July 04, 2014

Email ThisBlogThis!Share to TwitterShare to FacebookShare to Pinterest
Labels: All for a Sister, Allison Pittman

Thank you for an honest, straight-forward review. Taking the time to read and share your reaction is so valuable to a new book, and I think sometimes it's more helpful to have a review that isn't 100% positive, because all reading experiences are a give-and-take.

I will totally agree that the story touches on an "odd" topic--it really was a stretch for me, and I hope readers will take a chance!