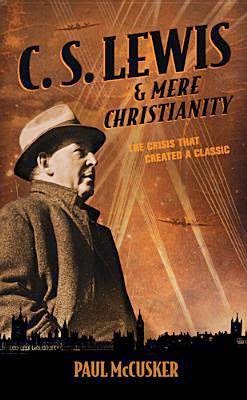 Mere Christianity is one of the best books of Christian apologetics ever written. Arguably, no book other than the Bible itself has had as much influence for the cause of the gospel over the past 60 years. The story of how that message came to be created, during the rigors of World War II in England, is fascinating in and of itself. But it also addresses a very important question: How do we present the gospel effectively to a culture that has Christian foundations but has become largely secularized and ignorant of biblical truth?

C. S. Lewis & Mere Christianity develops the circumstances of Lewis’s life and the inner workings of the BBC. It also goes into greater detail about life in the middle of war against Nazi Germany, and Lewis’s series of broadcasts that extended into 1944.

This was an interesting book. The focus was on what was happening in C. S. Lewis life before, during, and after writing one of his most famous apologetic book, Mere Christianity. I read the latest biography on him by Alister McGrath last summer so much of this I already knew. This book focused more on world events happening at the time. It was worth reading. I feel like I have a rounded perspective now. Recommended.

PAUL McCUSKER is the Peabody Award-winning writer and director of the audio drama "Bonhoeffer: The Cost of Freedom," along with the multiple award-winning audio dramatizations of "The Chronicles of Narnia," "The Screwtape Letters," "A Christmas Carol," his original series "The Luke Reports: The Life of Jesus" (honored as Best Audio Drama by the prestigious Audie Awards) and "The Father Gilbert Mysteries" (also an Audie Award nominee), all for Focus On The Family Radio Theatre.

Apart from dramatizations of C.S. Lewis' "Narnia" and "Screwtape," he also scripted the original audio drama "C.S. Lewis At War" and written the companion book "C.S. Lewis & Mere Christianity: The Crisis That Created A Classic." His work has extended to writing the detailed footnotes for "The Annotated Screwtape Letters" for HarperOne. (It is the first authorized annotated edition of any book by C.S. Lewis.)

McCusker is also a writer and director for the long-running children's audio program "Adventures in Odyssey," scripting over 250 episodes as well as 2 of the animated video series, authoring 18 spin-off novels, and serving as the general editor for "The Imagination Station" chapter books. For adults, he has written the Gold Medallion-nominated "Epiphany," "The Mill House" and, with Dr. Walt Larimore, "The Gabon Virus" and "The Influenza Bomb." His plays and musicals have been performed in churches and community theaters across the country. One, "A Time for Christmas," was a Dove Award nominee. His lyrics have been put to music by the Grammy Award-winning Michael W. Smith.

Review copy provided by publisher in exchange for a review.
- July 06, 2014