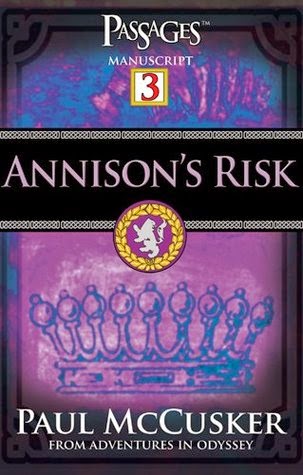 A game of hide-and-seek takes Maddy Nicholaivitch to Marus, where she is taken in by a beautiful princess who has just married the conquering king. After overhearing the secret plans of the king’s most trusted advisor, Maddy must decide if her loyalty to the princess is worth the price of her life. Based on the biblical story of Esther, Annison’s Risk takes readers on a journey with a queen who is willing to risk her life in order to save her people. Any fan of Tolkien will appreciate this fantasy story, and with a new cover and interior graphics, it’s better than ever!

I enjoyed this children's retelling of the bible story Esther. The book starts in the familiar town of Odyssey then Maddy is transported to the alternate land of Marus. She ends up being an assistant to the queen. This is book is part of the passages series but can stand alone. The plot and characters are well developed and interesting. I think this would be good especially for upper elementary girls although boys will like it too. Recommended.


PAUL McCUSKER is the Peabody Award-winning writer and director of the audio drama "Bonhoeffer: The Cost of Freedom," along with the multiple award-winning audio dramatizations of "The Chronicles of Narnia," "The Screwtape Letters," "A Christmas Carol," his original series "The Luke Reports: The Life of Jesus" (honored as Best Audio Drama by the prestigious Audie Awards) and "The Father Gilbert Mysteries" (also an Audie Award nominee), all for Focus On The Family Radio Theatre.

Apart from dramatizations of C.S. Lewis' "Narnia" and "Screwtape," he also scripted the original audio drama "C.S. Lewis At War" and written the companion book "C.S. Lewis & Mere Christianity: The Crisis That Created A Classic." His work has extended to writing the detailed footnotes for "The Annotated Screwtape Letters" for HarperOne. (It is the first authorized annotated edition of any book by C.S. Lewis.)

McCusker is also a writer and director for the long-running children's audio program "Adventures in Odyssey," scripting over 250 episodes as well as 2 of the animated video series, authoring 18 spin-off novels, and serving as the general editor for "The Imagination Station" chapter books. For adults, he has written the Gold Medallion-nominated "Epiphany," "The Mill House" and, with Dr. Walt Larimore, "The Gabon Virus" and "The Influenza Bomb." His plays and musicals have been performed in churches and community theaters across the country. One, "A Time for Christmas," was a Dove Award nominee. His lyrics have been put to music by the Grammy Award-winning Michael W. Smith.