Still running behind but I can't wait to read this one. :) 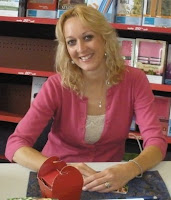 Alice J. Wisler is an author, public speaker, advocate, and fundraiser. She has been a guest on several radio and TV programs to promote her self-published cookbooks, Slices of Sunlight and Down the Cereal Aisle. She graduated from Eastern Mennonite University and has traveled the country in jobs that minister to people. Alice was raised in Japan and currently resides in Durham, North Carolina.

* Born in Osaka, Japan and lived in Japan for 18 years

* Worked at a group home for disadvantaged kids outside of Philadelphia

* Taught English as a Second Language in Japan

* Speaks and teaches on Writing the Heartache

* Has three kids on earth, and one in Heaven

There are two things twenty-nine-year-old Jackie Donovan asks God for: an honest, wonderful man to marry, and to own a bed-and-breakfast in the Outer Banks region. In the meantime, Jackie works for Lighthouse Views magazine, writing articles about other local business owners, and intrepidly goes on the blind dates set up by her well-meaning but oh-so-clueless relatives.

There's one specific property Jackie dreams of purchasing: the Bailey Place, a fabulous old home where Jackie spent many happy childhood afternoons, a place that has now fallen into disrepair because of its outrageous price tag.

When Jackie meets handsome Davis Erickson, who holds the key to the Bailey Place, Jackie is sure God has answered both her prayers. But as Jackie learns some disturbing details about Davis's past, she begins to question her own motivation. Will she risk her long-held dreams to find out the truth?

If you would like to read the first chapter of Hatteras Girl, go HERE.
- November 10, 2010