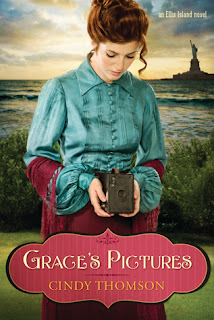 “Listen to me,” her mother had said. “I don’t care what lies your father once spoke to you, darlin’. . . . Remember instead this: You are smart. You are important. You are able.”

Grace McCaffery hopes the bustling streets of New York hold all the promise the lush hills of Ireland did not. As her efforts to earn enough money to bring her mother to America fail, she wonders if her new Brownie camera could be the answer. But a casual stroll through a beautiful New York City park turns into a hostile run-in with local gangsters, who are convinced her camera holds the first and only photos of their elusive leader.

A policeman with a personal commitment to help those less fortunate finds Grace attractive and longs to help her, but Grace believes such men cannot be trusted. Spread thin between her quest to rescue her mother, do well in a new nanny job, and avoid the gang intent on intimidating her, Grace must put her faith in unlikely sources to learn the true meaning of courage and forgiveness.

Overall this was a good Christian historical fiction book. The author did a good job with the historical detail. The plot was a little predictable but interesting. Set in the early 1900s there are details about early cameras and police. Grace does take pictures but its the background plot. The main plot involves her life and her first job as a nanny. Also present is the police officer who she is not sure who can trust. There is a tiny bit of romance between the two. Over the course of the book Grace matures and learns the lesson that things are not always what they seem to be. Recommended to fans of Christian historical fiction.
- July 27, 2013