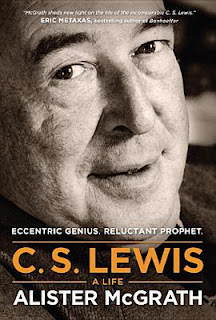 Fifty years after his death, C. S. Lewis continues to inspire and fascinate millions. His legacy remains varied and vast. He was a towering intellectual figure, a popular fiction author who inspired a global movie franchise around the world of Narnia, and an atheist-turned-Christian thinker.

In C.S. Lewis—A Life, Alister McGrath, prolific author and respected professor at King’s College of London, paints a definitive portrait of the life of C. S. Lewis. After thoroughly examining recently published Lewis correspondence, Alister challenges some of the previously held beliefs about the exact timing of Lewis’s shift from atheism to theism and then to Christianity. He paints a portrait of an eccentric thinker who became an inspiring, though reluctant, prophet for our times.

You won’t want to miss this fascinating portrait of a creative genius who inspired generations.

I was very interested in this biography because C. S. Lewis has always been an author that stuck with me. He is most famous for his books The Narnia Chronicles, Mere Christianity, and The Screwtape Letters. I was hesitant because I have never been a big reader of biographies. They are usually dry, boring, and hard to read. This author does a great job in not letting it be that way. The usual information is in the book like family details. I like the way the book was divided and the chapter titles. It was well written and flowed well. There was so much about C. S. Lewis that I had no clue about. My mind and heart wanted to yell at him from the hindsight outsider view several times. I loved C. S. Lewis's view on literature: "In reading great literature I become a thousand men and yet remain myself. Like the night sky in the Greek poem, I see with a myriad eyes, but it is still I who see." There is so much more I could write but to gain a view of what the book offers read the table of contents, it really spells it out. The book was easy to read and detailed without being bogged down. I now to want to read all of his works. He really was an interesting man and I'm glad I read his life story. It also provided a behind the scenes look at his life when he was writing the books and how they came to be which is great for readers. I highly recommend this book. I will not forget what I read in it. :)


Alister E. McGrath is a historian, biochemist, and Christian theologian born in Belfast, Northern Ireland. A longtime professor at Oxford University, he now holds the chair in theology, ministry, and education at the University of London. He is the author of several books on theology and history, including Christianity's Dangerous Idea, In the Beginning, and The Twilight of Atheism. He lives in Oxford, England, and lectures regularly in the United States