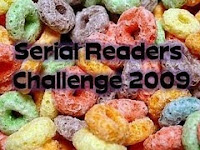 The serial readers challenge was hosted by Beth at Just Your Average Carpool Queen.
http://justyouraveragecarpoolqueen.blogspot.com/2008/11/serial-readers-challenge-2009-as-many.html


I did enjoy this challenge and would participate again. All of the series were good but my favorite would be the Pink Carnation series by Lauren Willig. I read 10 series total or part of series. The total number of books read is 60. :)


1. I am going to read the Rock Harbor Mystery series by Colleen Coble (DONE)

2. I read the After the Storm Continuity series published by Steeple Hill Love Inspired. (DONE)

- The Matchmaking Pact by Carolyne Aarsen

- A Family for Thanksgiving by Patricia Davids


3. I am going to read Without a Trace Continuity series from Love Inspired Suspense (DONE)


- What Sarah Saw by Margaret Daley


- A Cloud of Suspicion by Patricia Davids


- Her Last Chance by Terri Reed

4. I am going to read the Weddings by Woodwards Continuity series from Love Inspired


- Twice Upon a Time by Lois Richer (DONE)


- A Ring and a Promise by Lois Richer (DONE)

5. I am going to reread at least some of the Babysitters Club Series by Ann M. Martin


6. I read the Cody Gunner series by Karen Kingsbury (Done)


- Just Beyond the Clouds


- This Side of Heaven

7. I am reading the Boo series by Rene Gutteridge (Done)


- The Secret History of the Pink Carnation


- The Masque of the Black Tulip


- The Deception of the Emerald Ring


- The Seduction of the Crimson Rose


- The Temptation of the Night Jasmine


- Silent in the Grave


- Silent in the Sanctuary


- Silent on the Moor

Wow, You did a great job. Congratulations.