*** Leave a comment to be entered to win. Two copies available. Deadline is Tuesday April 28 at midnight.*** 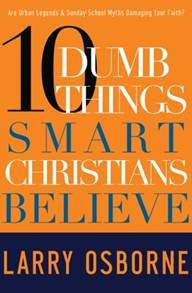 Just Because “Everyone Believes It”
Doesn’t Make It True
People don’t set out to build their faith upon myths and spiritual urban legends. But somehow such falsehoods keep showing up in the way that many Christians think about life and God. These goofy ideas and beliefs are assumed by millions to be rock-solid truth . . . until life proves they’re not. The sad result is often a spiritual disaster—confusion, feelings of betrayal, a distrust of Scripture, loss of faith, anger toward both the church and God.

But it doesn’t have to be so. In this delightfully personal and practical book, respected Bible teacher Larry Osborne confronts ten widely held beliefs that are both dumb and dangerous. Beliefs like these:

Catchy title; sounds like an interesting read. Please add my name to the drawing. Thanks!

OOh, this does look good. I sometimes get frustrated by the cliches thrown out by well-meaning Christians. Please add my name, too. Thanks for highlighting this book. I'm definitely going to read, whether I win or not. :)

Sounds like an interesting book. I'd love to be entered into the drawing.

This sounds so good! Please add me. I really enjoy these books about the stupid side of Christianity, for some reason. They're kind of reassuring.

It's always great to learn more of what the Bible teaches than what we sometimes think to be true. Please add me for the giveaway. Thanks!
worthy2bpraised[at]gmail[dot]com

I have a little something for you on my blog. You can pick it up here.

What an intriguing book! I am a Christian who tends to follow these myths and they can cause me a lot of grief! Please enter me in your book giveaway drawing. I appreciate it!
Thanks, Cindi
jchoppes[at]hotmail[dot]com