The Lost Hours by Karen White 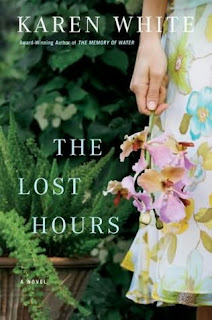 When Piper Mills was twelve, she helped her grandfather bury a box that belonged to her grandmother in the backyard. For twelve years, it remained untouched.

Now a near fatal riding accident has shattered Piper’s dreams of Olympic glory. After her grandfather’s death, she inherits the house and all its secrets, including a key to a room that doesn’t exist—or does it? And after her grandmother is sent away to a nursing home, she remembers the box buried in the backyard. In it are torn pages from a scrapbook, a charm necklace—and a newspaper article from 1939 about the body of an infant found floating in the Savannah River. The necklace’s charms tell the story of three friends during the 1930s— each charm added during the three months each friend had the necklace and recorded her life in the scrapbook. Piper always dismissed her grandmother as not having had a story to tell. And now, too late, Piper finds she might have been wrong.

My Review:
I stayed up until 12:20 this morning finishing this book. This was a great southern fiction novel more character driven than plot though both are interesting. The first half of the book seemed to move slowly to me and not as much happened. The last half of the book the characters developed more and the plot moved along. The last part had me breathless turning the pages to see what happens. I loved the mystery with the diary pages and grandmother's secrets. The Lost Hours is a great title for it. I would love another novel with Piper, Helen, Tucker, and the girls. Overall I recommend this novel. This was my first Karen White novel. I am looking forward to reading more by her. :)

After playing hooky one day in the seventh grade to read Gone With the Wind, Karen White knew she wanted to be a writer-or become Scarlett O'Hara. In spite of these aspirations, Karen pursued a degree in business and graduated cum laude with a BS in Management from Tulane University. Ten years later, after leaving the business world, she fulfilled her dream of becoming a writer and wrote her first book. In the Shadow of the Moon was published in August, 2000. This book was nominated for the prestigious RITA award in 2001 in two separate categories. Her books have since been nominated for numerous national contests including another RITA, the Georgia Author of the Year Award and in 2008 won the National Readers' Choice Award for Learning to Breathe.

Karen currently writes what she refers to as ‘grit lit'-southern women's fiction-and has recently expanded her horizons into writing a mystery series set in Charleston. Her tenth novel, The Lost Hours, will be released in trade paperback by New American Library, a division of Penguin Publishing Group, in April 2009.

Karen hails from a long line of Southerners but spent most of her growing up years in London, England and is a graduate of the American School in London. She currently lives near Atlanta, Georgia with her husband and two teenaged children, and a spoiled Havanese dog (who appears in several of her books), Quincy. When not writing, she spends her time reading, singing, playing piano, chauffeuring children and avoiding cooking.
- April 13, 2009

Wow, sounds good. Thanks for the review!

Thanks, Brittanie, for the great review---I'm so glad you enjoyed the book!

Oooh, this sounds great! I just added it to my TBR list..thanks for the review!

Thanks for the terrific review, Brittanie! I'm reading this book, right now, at page 50 and finding it's a little slow going. I'm glad to know it picks up. I'm so tired from vacation that I assumed it was just me. :)