Breach of Trust by Diann Mills

Award-winning author, DiAnn Mills, launched her career in 1998 with the publication of her first book. Currently she has over forty books in print and has sold more than a million copies.

DiAnn believes her readers should “Expect an Adventure.” DiAnn Mills is a fiction writer who combines an adventuresome spirit with unforgettable characters to create action-packed novels.

Six of her anthologies have appeared on the CBA Best Seller List. Three of her books have won the distinction of Best Historical of the Year by Heartsong Presents. Five of her books have won placements through American Christian Fiction Writer’s Book of the Year Awards 2003 – 2007, and she is the recipient of the Inspirational Reader’s Choice award for 2005 and 2007. She was a Christy Awards finalist in 2008.

DiAnn is a founding board member for American Christian Fiction Writers, a member of Inspirational Writers Alive, Romance Writers of America’s Faith, Hope and Love, and Advanced Writers and Speakers Association. She speaks to various groups and teaches writing workshops around the country. DiAnn is also a mentor for Jerry B. Jenkins Christian Writer’s Guild.

She lives in sunny Houston, Texas. DiAnn and her husband have four adult sons and are active members of Metropolitan Baptist Church. 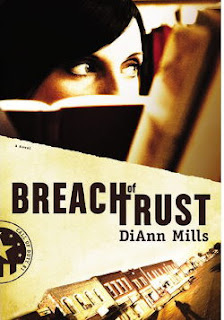 A betrayal by the one man she thought she could trust.

Forced to disappear to protect the lives of her loved ones, Paige has spent the last several years building a quiet life as a small-town librarian. But the day a stranger comes to town and starts asking questions, Paige knows her careful existence has been shattered.

He is coming after her again. And this time, he intends to silence her for good...

Paige Rogers is a former CIA agent who lost all she treasured seven years ago when her entire team was killed in a covert mission. She blames their leader—Daniel Keary—whom Paige believes betrayed them. Disillusioned and afraid for her life, she disappeared and started a new life as a librarian in small town Split Creek, Oklahoma.

But her growing relationship with high school football coach Miles Laird and the political ambitions of her former boss threaten to unmask her. When Keary announces his candidacy for governor of her state, he comes after Paige to ensure that she won't ruin his bid for office by revealing his past misdeeds. He threatens everything she holds dear, and Paige must choose between the life of hiding that has become her refuge . . . or risking everything in one last, desperate attempt to right old wrongs.

If you would like to read the first chapter of Breach Of Trust, go HERE

My Review: I loved this book. Finally something that reminds me of Dee Henderson (my all time favorite author). Romantic Suspense is also one of my favorite type of stories. The beginning was a little slow but after that I was hooked. Paige is a normal librarian in a small town or so we think for just a while in the beginning. Miles Laird is the local football coach who has a crush on Paige and has no idea who she really is and what she used to do for a living. Paige is a former CIA agent hiding out to protect her family and friends who think she's dead. One of the main things Paige really struggles with is her Christian faith and the things asked of her by being a CIA agent. Also Daniel Keary a candiate for governor starts harrassing her because of what he things she knows about him as her ex boss. The author does a good job at interweaving the different plot lines. I was already a fan of her historical fiction and now I am a huge fan of her suspense. I highly recommend this book.