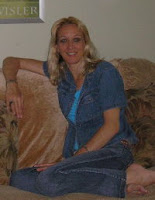 Alice sold her first story to David C. Cook for a take-home Sunday School paper called Sprint. The year was 1988, this was her first submission to a paying market, and the check sent to her was for $125.00.

She was on her way!

Since then, Alice has sold articles and devotions to the Upper Room, Alive Now, Standard Publishing, ByLine magazine and others.

In 2006 she sent her novel Rain Songto Bethany House...and the rest is history! She signed a two -book deal and the second, How Sweet It Is will be out in 2009.

Nicole Michelin avoids airplanes, motorcycles, and most of all, Japan, where her parents once were missionaries. Something happened in Japan...something that sent Nicole and her father back to America alone...something of which Nicole knows only bits and pieces. But she is content with life in little Mount Olive, North Carolina, with her quirky relatives, tank of lively fish, and plenty of homemade pineapple chutney. Through her online column for the Pretty Fishy Web site, she meets Harrison Michaels, who, much to her dismay, lives in Japan. She attempts to avoid him, but his emails tug at her heart. Then Harrison reveals that he knew her as a child in Japan. In fact, he knows more about her childhood than she does.

If you would like to read the first chapter of Rain Song, go HERE

I could not put this book down. I had to know what happened next. I became absorbed in the book and the characters lives. My only complaint is the ending seemed a little abrupt. I would have liked a little more closure or a sequel. I am hoping for the sequel. :) This is an engaging debut novel and I am going to read this author's next book for sure. I happily recommend this book. Lovers of women's fiction might like it the best. :)

That sounds terrific! I'm adding it to my wish list. Thanks, Brittanie!

Thanks for posting this here and for your review of Rain Song!

~ Alice J. Wisler
author of Rain Song and the upcoming How Sweet It Is