Threads of Change by Jodi Barrows 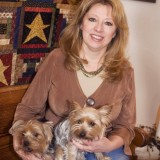 ABOUT THE AUTHOR: Over the past twenty years, Jodi has remarkably touched thousands of quilters throughout the world with her unique method called Square in a Square®. Her point of view provides the quilter with the freedom to create most any quilt design with speed and accuracy.

Jodi has spoken to quilting audiences throughout the United States, Canada, Australia, Italy and S. Africa. She has appeared as a guest on several quilting shows, including TNN’s Aleene’s Creative Living, TNN’s Your Home Studio, Perfecting Patchwork on Family Net TV and a pbs series with Kaye Wood.

Jodi was raised in southwest Kansas, has two grown sons, and is married to Steve, her high school sweetheart. 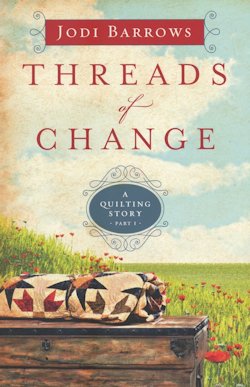 Conflict develops in the South,

And Grandfather sells their precious home.

In the first book of A Quilting Story series, the four cousins-with social graces, charm, and a love for quilting-will face the anguish of life on the frontier in 1856 with every turn along the wagon trail. Raging storms and adversities hit the small band of travelers. Relieved to finally arrive at the abandoned military post at Fort Worth, Texas, they begin the hard work of establishing a new home. When trials follow them, they must decide to become true warriors of their hearts, minds, and souls or fall to the sufferings of prairie life.

Join the four women on a passage of friendship, love, and self-discovery as lives are mended around the quilting frame.

If you would like to read the first chapter of Threads of Change, go HERE.