The Promise by Dan Walsh and Gary Smalley (Review) 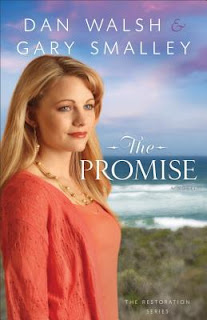 One home, two hearts, and the power of a promise kept . . . For the last five months, Tom Anderson has been without a job, a fact he's been hiding from his wife Jean--and everyone else. He leaves each morning, pretending nothing has changed, and spends his disheartening day rotating through coffee shops and the library, using their wifi to search job listings online. The stress of keeping this secret is beginning to put serious strain on his marriage.

But Tom's not the only one hiding something. Jean Anderson has a secret of her own--one that will seriously complicate their situation. Will the promises they made on their wedding day hold firm?

I thought this was an okay contemporary Christian fiction book. It was simple and easy to read. Although the plot was very predictable it was still a good story. Parts of it were depressing since it took most of the book for Tom to get caught in his ruse. He lost his job five months ago and his uncle is the one who caught him working at the coffee shop or he would have kept fooling everyone until the bank took the house or cars. I felt bad for his wife too since he was treating her so bad on top of lying to her. There were good life lessons to be learned in the book. One is the truth always comes out. Also generational curses can be broken. We do not have to be like our parents. In this case it is the fathers who have a big lesson to learn. This is book two in  the Restoration Series and continues to follow the same family. I only felt a little lost as the first book contains the story of Tom's mother and father. Recommended.


Dan Walsh is the bestselling author of several books, including The Dance with Gary Smalley, The Discovery, and The Reunion. He has won three Carol Awards, and two of his novels were finalists for RT Reviews Inspirational Book of the Year for 2011 and 2012. A member of American Christian Fiction Writers, Dan served as a pastor for 25 years. He lives with his wife in the Daytona Beach area, where he's busy researching and writing his next novel.

Gary Smalley is one of the country's best-known authors and speakers on family relationships and has appeared on national television programs such as Oprah, Larry King Live, and TODAY, as well as numerous national radio programs. He is the bestselling and award-winning author or coauthor of many books, including the Baxter Family Redemption series with Karen Kingsbury and The Dance with Dan Walsh. Gary and his wife Norma have been married for 49 years and live in Missouri.

Available August 2013 at your favorite bookseller from Revell, a division of Baker Publishing Group.