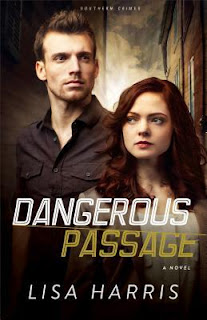 When two Jane Does are killed on the outskirts of Atlanta, Georgia, detective and behavioral specialist Avery North discovers they share something in common--a tattoo of a magnolia on their shoulders. Suspecting a serial killer, Avery joins forces with medical examiner Jackson Bryant to solve the crimes and prevent another murder. But it doesn't take long for them to realize that there is much more to the case than meets the eye. As they venture deep into a sinister world of human trafficking, Avery and Jackson are taken to the very edge of their abilities--and their hearts.

"Dangerous Passage "exposes a fully-realized and frightening world where every layer peeled back reveals more challenges ahead. Romantic suspense fans will be hooked from the start by Lisa Harris's first installment of the new Southern Crimes series.

I thought this was an okay Christian romantic suspense book. It did not have enough development in the characters or plot. I did not feel involved. It did not feel like a first book in a series but like a second. When the book begins it felt like I was supposed to already know what's going on. Even when Jackson came into the picture it felt like we were missing some details.  It had a lot of potential as far as characters and plot. The faith element was ok. I want to read the next book in the series to see if it gets better. This is my favorite genre. Not recommended unless you want an okay read.


Lisa Harris is a Christy Award finalist and the winner of the Best Inspirational Suspense Novel for 2011 from Romantic Times. The author of more than twenty books, Harris and her family have spent over eight years living as missionaries in Mozambique, where she homeschools, leads a women's group, and runs a non-profit organization that works alongside their church-planting ministry. Visit www.lisaharriswrites.com for more.

Available at your favorite bookseller from Revell, a division of Baker Publishing Group
Review copy provided by publisher in exchange for an honest review.
- September 15, 2013