The Bridge of Peace by Cindy Woodsmall (Review)

Cindy Woodsmall is a New York Times best-selling author whose connection with the Amish community has been featured on ABC Nightline and on the front page of the Wall Street Journal.

She was also a homeschool mom. As her children progressed in age, her desire to write grew stronger. After working through reservations whether this desire was something she should pursue, she began her writing journey. Her husband was her staunchest supporter.

Her first novel released in 2006 to much acclaim and became a best seller. Cindy was a 2007 ECPA award finalist, along with Karen Kingsbury, Angela Hunt, and Charles Martin.

Her second book, When the Morning Comes, hit numerous best-sellers lists across the US, including edging into the extended list of the New York Times, coming in at number thirty-four.

Cindy continues to write and release best-selling works of fiction, and she’s also written a nonfiction work with an Old Order Amish friend, Miriam Flaud. The book is titled Plain Wisdom: An Invitation into an Amish Home and the Hearts of Two Women. It will release March 11, 2011.

Her real-life connections with Amish Mennonite and Old Order Amish families enrich her novels with authenticity.

As an adult, Cindy became friends with a wonderful Old Order Amish family who opened their home to her. Although the two women, Miriam and Cindy, live seven hundred miles apart geographically, and a century apart by customs, when they come together they never lack for commonality, laughter, and dreams of what only God can accomplish through His children.

Cindy, her husband, their three sons and two daughters-in-law reside in Georgia. 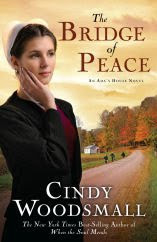 Lena Kauffman is a young Old Order Amish schoolteacher who has dealt all her life with attention raised by a noticeable birthmark on her cheek. Having learned to move past the stares and whispers, Lena channels her zest for living into her love of teaching. But tensions mount as she is challenged to work with a rebellious young man and deal with several crises at the schoolhouse that threaten her other students. Her lack of submission and use of ideas that don’t line up with the Old Ways strengthen the school board’s case as they begin to believe that Lena is behind all the trouble.

One member of the school board, Grey Graber, feels trapped by his own stifling circumstances. His wife, Elsie, has shut him out of her life, and he doesn’t know how long he can continue to live as if nothing is wrong. As the two finally come to a place of working toward a better marriage, tragedy befalls their family.

Lena and Grey have been life-long friends, but their relationship begins to crumble amidst unsettling deceptions, propelling each of them to finally face their own secrets. Can they both find a way past their losses and discover the strength to build a new bridge?

If you would like to read the first chapter of The Bridge of Peace, go HERE.

I did not realize this was the second book in a series until I started reading. I could tell I was missing background information and was a little lost. As the book went on it got better. It felt like an Amish soap opera at times. There were multiple plot lines but the main focus was on Lena Kauffman. Lena has been teased for most of her life because of a huge birthmark on her face. She teaches in the local Amish school and it is not always easy. This year a new family moves in and the teenage son challenges her every day. His parents start to cause trouble for her with the school board. Will she keep her job is one of the main questions. The other characters even the Amish seem to deal with more real life issues than in other Amish books. Overall I thought the book was okay and fans of Amish fiction will like the series. Read them in order though. :)

Email ThisBlogThis!Share to TwitterShare to FacebookShare to Pinterest
Labels: CFBA, Cindy Woodsmall, The Bridge of Peace