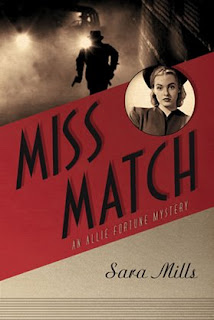 FBI agent Jack O'Connor receives a letter from Maggie, a woman he used to love, saying she's in trouble in Berlin. The FBI refuses to get involved, so Jack asks Allie Fortune to help him investigate. Allie and Jack pose as a missionary couple who want to bring orphans back to the United States.

A child finds important documents that everyone in the city-- Soviets and Allies alike -- want for themselves. Maggie refuses to tell Jack what the documents are, saying if things go wrong they are better off not knowing.

Through the course of the search Allie's past is brought back to her, half a world away from home.


My Review:
I read the first book in this series, Miss Fortune, last year and loved it. I could not wait for book two in the series to come out, Miss Match. It was definitely worth the wait. It is even better than book one. I read it this morning and could hardly put it down. One of the cool things about this series is the setting. It is set in the late 1940's after the war. One of the main characters is Allie short for Alexandra Fortune who is a private investigator in New York City. She meets Jack who is in the FBI in the first book. They are both pining for lost loves. Allie has spent 8 years trying to find David her fiance who never came home from the war but she does not believe to be dead. Jack has missed Maggie his childhood sweetheart ever since she told him she could not marry him and joined the war effort as nurse. Allie and Jack become good friends in the first but nothing else. In this book Jack gets a letter out of the blue from Maggie saying she is in Berlin and in great danger and needs his help. Allie being the good friend she is won't let him go alone or without a plan so she goes with him. The plot and characters are well developed and interesting. There is a sense of danger throughout the book and I felt like I was in the bleak Berlin after the war. The author loves film noir which comes through in the series without being too dark. The ending is abrupt and a major cliffhanger. I can't wait for book three to come out. This is going on my 2009 favorites list. I highly recommend the first book and this one. :)

A link to a great interview with the author:

Link to Amazon to buy and or read the excerpt:

About the author:
Sara Mills lives in Alberta, Canada in the foothills of the Rocky Mountains. She is freelance writer, wife and mother of three.

Aside from animals and swords, Sara loves film noir, Humphrey Bogart and The Maltese Falcon.