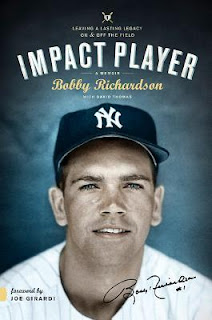 From the Inside Flap

What I do know, however, is that I have lived a blessed life. I played more than fourteen hundred games in the major leagues, all with the New York Yankees. I played in seven World Series, three times on the winning team. I received individual accolades and made lasting friendships. I was able to coach and show young college players the Yankee way of baseball and, I hope, God’s way of living. And I’ve been asked to share the story of my faith more times than I can estimate.

If my life is a testament to anything, it is to God’s mercy and grace. I have been blessed far beyond what I deserve. My aim in both baseball and life has been simple: to make an impact by being used by God in the lives of others.

When accounts of my life are written, I hope two things will be said of me. First, that I played baseball in a way that made my team better. Second, and more important, that I lived my life in a way that drew others to my Savior.

To God be the glory.
—Bobby Richardson
My Review:
I thought this was a good easy to read baseball memoir about Bobby Richardson. I have almost zero knowledge of sports so some of the baseball details went over my head. I was impressed at how strong his faith is and how he shared it over his whole life including a career in baseball. It was interesting to me to hear the stories behind the ball. The different players he was friends with and the lasting relationships he made impressed me. His dedication to his family was impressive also. I was craving something different to read and this was perfect. Recommended to fans of baseball and memoirs. :)
Bobby Richardson played second base for the New York Yankees from 1955 to 1966. During his career, he was named to seven All-Star teams (’57, ’59, ’62, ’63, ’64, ’65, and ’66), he appeared in seven World Series, including three championship seasons (’58, ’61, and ’62), and he remains to this day the only player from a losing team ever to be named World Series MVP. One of only eighteen players ever to hit a World Series grand slam, Bobby still holds the MLB record for the most consecutive World Series games played (thirty).

After retiring from MLB in 1966, Bobby went on to coach baseball for the University of South Carolina and later at Liberty University. An outspoken Christian, he played a vital role in the creation of the Fellowship of Christian Athletes and Baseball Chapel and is still an active speaker and evangelist.

Bobby lives in Sumter, South Carolina, with his wife, Betsy. They are the proud parents of five children and fifteen grandchildren.

David Thomas is a former sportswriter, the author of Remember Why You Play, and the cowriter of All In and SEAL of God. He lives in the Dallas–Fort Worth area with his wife, Sally, and their two children.
- August 19, 2013