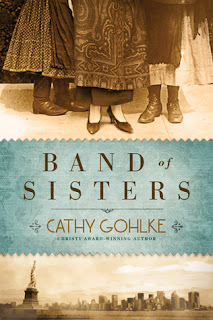 Maureen O’Reilly and her younger sister flee Ireland in hope of claiming the life promised to their father over twenty years before. After surviving the rigors of Ellis Island, Maureen learns that their benefactor, Colonel Wakefield, has died. His family, refusing to own his Civil War debt, casts her out. Alone, impoverished, and in danger of deportation, Maureen connives to obtain employment in a prominent department store. But she soon discovers that the elegant facade hides a secret that threatens every vulnerable woman in the city.

Despite her family’s disapproval, Olivia Wakefield determines to honor her father’s debt but can’t find Maureen. Unexpected help comes from a local businessman, whom Olivia begins to see as more than an ally, even as she fears the secrets he’s hiding. As women begin disappearing from the store, Olivia rallies influential ladies in her circle to help Maureen take a stand against injustice and fight for the lives of their growing band of sisters. But can either woman open her heart to divine leading or the love it might bring?

I thought this was an okay Christian historical fiction book. It was a little long in places and the text was too small which made it harder to read. The characters and plot were good though so I kept reading. The author did a good job on the historical details. There was a little romance, mystery, and drama. Two of the major things in the book are immigrant issues and white slavery. Maureen and her sister Katie come over from Ireland looking for a better life and run into new issues. Recommended to readers of Christian historical fiction.

Cathy Gohlke is the two-time Christy Award-winning author of William Henry is a Fine Name and I Have Seen Him in the Watchfires, which also won the American Christian Fiction Writers' Book of the Year Award and was listed by Library Journal as one of the Best Books of 2008.
Cathy has worked as a school librarian, drama director, and director of children's and education ministries. When not traipsing the hills and dales of historic sites, she, her husband, and their dog, Reilly, make their home on the banks of the Laurel Run in Maryland. Visit her website at www.cathygohlke.com.