Borders of the Heart by Chris Fabry (Review) 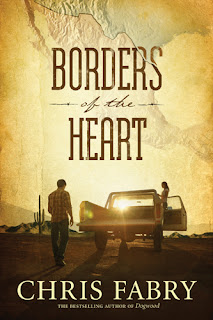 Desperate to escape haunting memories, J. D. Jessup travels from Nashville to Tucson and volunteers on an organic farm. The hardened landowner has one prevailing rule: If J. D. sees an "illegal," call the border patrol. But when an early morning ride along the fence line leads him to a beautiful young woman named Maria, near death in the desert, his heart pulls him in another direction. Longing to atone for the choices that drove him to Tucson, J. D. hides her and unleashes a chain of deadly events he could never have imagined. Soon they are running from a killer and fighting for their lives. As secrets of their pasts emerge, J. D. realizes that saving Maria may be the only way to save himself.

I did not enjoy reading this book. I am not sure why maybe because the pace was slow and dragged a bit. There was not enough plot development throughout the book. It lagged in spots where it seemed the main characters were doing the same thing over and over. J.D. and Maria spent a lot of time on the run. There was the same debate between them until the end of the book.The plot line itself was interesting and the characters well developed for the most part. I could feel the atmosphere and see the setting which this author is good at. The ending was good and I liked it. Many times I had to suspend belief though. I have read other books by him before and liked them.

My stories come from life and sometimes art imitates stories.

Four years ago my family and I moved to the desert. I'm not a desert person. But I knew the experience would at some point provide a rich, fertile place to tell a dusty tale.

Borders of the Heart is my nod toward some of the great western writers--Cormac McCarthy and Larry McMurtry. It's a love story, a painful story of loss, a mystery, and an edge-of-your-seat thriller. I hope you enjoy the ride through Tucson and the surrounding area as much as I did.

If you haven't read it yet, Not in the Heart is another riveting, suspenseful, and yet relational story. A mystery within a mystery within an addiction. I dedicate it to all who have someone in their life who is addicted.

I was born in West Virginia in 1961. I read a lot, but not very fast, and wrote poems, songs, and transcribed Marx Brothers movies and memorized dialogue.

In 1984 I met Jerry Jenkins at Moody Bible Institute. He offered to help me learn to write and I took him up on the offer. In 1998, Jerry and Dr. Tim LaHaye hired me to help write the Left Behind: The Kids series. After that I worked on several other series for children and then published my first adult novel in 2008. It took more than six years to write Dogwood and find a publisher. It received a 2009 Christy Award.

My next novel, June Bug, drew its themes from the classic Victor Hugo tale, Les Miserables. Then, Almost Heaven released and also won a couple of awards.

I graduated from the W. Page Pitt School of Journalism at Marshall University in Huntington, West Virginia. I have been married to Andrea since 1982. We have nine children. In October of 2008, our family evacuated our house in Colorado, leaving behind all our belongings because of a toxic mold situation. Since then we have been living near Tucson, Arizona, working on recovering our health after the mold exposure.

Stop by my website at www.chrisfabry.com to learn more about my writing and radio endeavors, and be sure to sign up for my online newsletter, the FABRYGRAM. I can also be found on Facebook and Twitter, or you can email me at chris@chrisfabry.com.
- August 04, 2013

Email ThisBlogThis!Share to TwitterShare to FacebookShare to Pinterest
Labels: Borders of the Heart, Chris Fabry