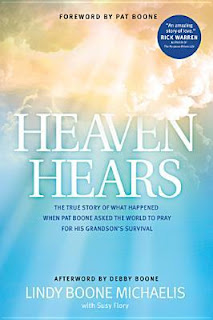 On June 19, 2001, Ryan Corbin, grandson of Pat Boone, accidentally stepped through a skylight and fell three stories onto a cement floor. When he broke through that roof, Ryan fell into a very different life from the one he had before as the beloved son of Lindy Boone Michaelis and first grandson of entertainment icon Pat Boone. As Ryan lingered between life and death in intensive care at UCLA Medical Center, Pat and Lindy decided to take action, in a big way; they went on Larry King Live, shared their faith, and asked millions of TV viewers to pray for Ryan. And so, they prayed. Heaven Hears is an unbelievable story of answered prayer—and it’s not over yet. This book will inspire you to look for answers to prayer and to see God’s miracles.

I thought this was an okay book. I expected more about Ryan than the book offered. It was mostly about his mother, Lindy. There was a lot of background on the Boone family. It was kind of like a memoir about Lindy. There was also some annoying sections of repeated information. It was amazing how he recovered some from the fall when the doctors thought he was going to die. He is not all the way recovered of course but he is far from dead. God does hear prayers and sometimes the answer is yes and people recover!


Lindy Boone Michaelis was born into the entertainment business as the second daughter of singer and entertainment icon Pat Boone. Along with her older sister, Cherry, and two younger sisters, Debby, and Laury, Lindy sang with her family in national and international singing tours from 1968 to 1977, including a tour of Japan with the Osmond Family. The Boone Girls recorded several Christian albums, including the Grammy award nominated "First Class." Lindy lives in Southern California with her husband of 26 years, attorney Mike Michaelis. She has three adult children: Ryan, Jessi, and Tyler. Lindy has worked in the fitness industry as a personal trainer and group fitness instructor. She also tours with a singing group called The New Chordettes, performing songs with tight harmonies from the forties, fifties, and sixties. On June 19, 2001, Lindy's life changed forever when her oldest son, Ryan Corbin, stepped through a skylight on the roof of his apartment building and fell several stories to a concrete floor. Ryan is still at home recovering from his traumatic brain injury (TBI) and Lindy coordinates Ryan's care. In 2003, the Boone family started a foundation called Ryan's Reach to help provide information and resources for survivors of TBI and their families.
- August 31, 2013