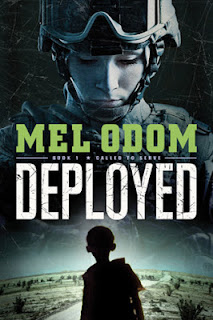 Lance Corporal Bekah Shaw joined the United States Marine reserves to help support herself and her son when her ex-husband, Billy Roy, decided they were no longer his responsibility. But when her team is activated and sent to Somalia on a peacekeeping mission, Bekah struggles with being separated from her son and vows to return safely.

Once a successful Somalian businessman, Rageh Daud has lost everything. Determined to seek revenge on the terrorists who killed his wife and son, he teams up with a group of thieves, killers, and others displaced by war. Despite his better judgment, Daud becomes the protector of a young orphaned boy—who becomes a pawn between the warring factions.

To defeat the terrorists and bring peace to the region, Bekah and her team must convince Daud that they are on the same side.

This was a very violent book. That said I did like it overall. I am a fan of Christian military/suspense/romance books. The characters and plot were interesting. It held my attention from the beginning. I really felt for Bekah and was mad on her behalf many times especially with the situation at home. A big guy who is a friend of her sorry ex husband picks a fight with her at a bar she did not even want to go to with friends and she uses her training. Of course it is a little town and she gets arrested not him. This she gets redeployed right after she makes bail. Thankfully her grandma is able to take her of her son. There is background information about Rageh interspersed with hers which makes it a little confusing in the beginning but after she goes overseas it starts to fit together. It really felt like a fast paced action movie once she got overseas. In the end it all tied together with a satisfying conclusion for all plot lines. The only thing that did not stand out enough was the faith element. There was not enough to classify this as a Christian fiction book to me. There is a book two focusing on one of her team members that I can't wait to read. Recommended.

I write in a number of fields, but always with the hope of telling an interesting tale that will incite a reader to think for himself or herself, to examine his or her own place in the world, and offer a little nudge in the direction of dreams, faith, and personal growth in spite of whatever odds a person has to face. I also believe we were all put here for a purpose. Hopefully, several purposes. I'm a father, a little league coach, a teacher, a friend, and a writer. I struggle to keep that balance, as many of us do these days, but I hold tightly to the belief that I'm doing all I can be doing, and doing what I should be doing.
- June 07, 2013