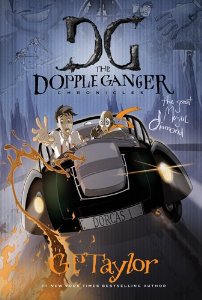 Everything was going so well for a change. . . . Sadie and Saskia Dopple, those troublesome twins, have been adopted by their loyal friend, the writer Muzz Elliott. And their friend Erik Morrissey Ganger is finally on his way to becoming a full-fledged detective. But when an anonymous note threatening Muzz Elliott arrives, the twins suddenly find themselves on an express train to danger. Awhirl in a series of crimes stolen right off the pages of Muzz Elliott’s own mystery novels, the twins need to figure out who’s behind this twisted plot, or Muzz Elliott will be framed for her own greatest literary invention: the theft of the Great Mogul Diamond.

Meanwhile, Erik speeds through the countryside in a lightning-fast convertible with private eye Dorcas Potts, racing the clock to find the twins and outwit a gang of robbers. At the end of the road (if he ever gets there), he and the twins will have to get their hands on the diamond first . . . even though Erik, the former thief, has sworn never to steal again.

What do you do when you aren’t sure what’s right? Sadie, Saskia, and Erik face this question head-on in the third installment of The Dopple Ganger Chronicles, by New York Times bestselling author G. P. Taylor.

I loved this book. This is a great unique series for elementary and up boys and girls. This is the third book and I recommend reading them in order to not miss any details and history. All of the books are good. I like the cool illustrations/comic strip like pages in the book too that are interspersed with regular pages of writing. It makes the book fly by and would be good for any kid that has trouble sitting down and reading a chapter book. The plot was interesting and held my attention from beginning to end and I am 30. This is a clean mystery/suspense book and I liked how more of the Christian element came out but not in an overt way. We learn more about Madame Raphael and the man in the pin striped suit which I think are a representation of an Angel and Jesus. I can't wait to read the next book in the series. Highly Recommended!


A motorcyclist and former rock band roadie turned Anglican minister, Graham Peter (G. P.) Taylor has been hailed as "hotter than Potter" and "the new C. S. Lewis" in the United Kingdom. His first novel, "Shadowmancer," reached #1 on the "New York Times" Best Sellers List in 2004 and has been translated into 48 languages. His other novels include "Wormwood" (another "New York Times" best seller which was nominated for a Quill Book Award), "The Shadowmancer Returns: The Curse of Salamander Street," "Tersias the Oracle," and "Mariah Mundi." Taylor currently resides in North Yorkshire with his wife and three children.
- June 23, 2013