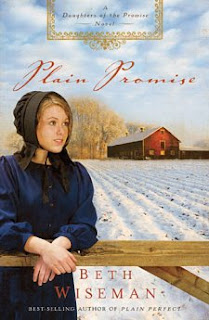 Plain Promise is book three in the Daughters of Promise series by Beth Wiseman. They are set in Lancaster County,Pennsylvania, Amish Country. I have enjoyed reading all of them so far. You can read it separate but I recommend all of the books as they have reoccurring background characters.

In this book the focus is on a young Amish Widow named Sadie Fisher. She has a small shop on her farm that sells Amish products but other than that she is really lonely since her husband was killed in a buggy accident. She wonders if she will ever find love again and have a family.

She has a cottage that she rents out when able and a wealthy Englischer named Kade Saunders decides to rent it for three months. This turns Sadie's world upside down as she deals with him. While Kade is there his soon to be ex wife that he has not seen in 6 months drops off his five year old autistic son Tyler. Kade has not spent much time with Tyler so it is a hard adjustment period at first. Sadie forms an immediate attachment to Tyler. Her feelings for his father also grow even though she fights it and tries to stay true to the Ordnung, the understood behavior by which the Amish live by. To complicate things even further Sadie has been writing letters for two years to a fellow Amish man in Texas named Milo. She expects to marry him in the next year even though she has not meet him in person yet.

I really like the spiritual development of the characters in the story including Sadie, Kade, and even little Tyler. When Kade arrives he feels empty on the inside and worn out by his crazy hectic lifestyle and last relationship blowout. He is drawn to the peaceful and spiritual aspects of the Amish around him. The book also has some subplots that are interesting. This is a heart warming novel with an interesting plot line and characters. The descriptions the author uses rings true and the writing overall is good. I highly recommend this book and the entire Daughters of Promise series.