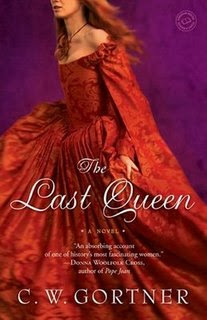 About the book:
The third child of Queen Isabel and King Ferdinand of Spain, Juana is born amid her parents’ ruthless struggle to unify their kingdom, bearing witness to the fall of Granada and Columbus’s discoveries. At the age of sixteen, she is sent to wed Philip, the archduke of Flanders, as part of her parents’ strategy to strengthen Spain, just as her youngest sister, Catherine of Aragon, is sent to England to become the first wife of Henry VIII.

Juana finds unexpected love and passion with her handsome young husband, the sole heir to the Habsburg Empire. At first she is content with her children and her life in Flanders. But when tragedy strikes and she inherits the Spanish throne, Juana finds herself plunged into a battle for power against her husband that grows to involve the major monarchs of Europe. Besieged by foes on all sides, her intelligence and pride used as weapons against her, Juana vows to secure her crown and save Spain from ruin, even if it could cost her everything.

With brilliant, lyrical prose, novelist and historian C. W. Gortner conjures Juana through her own words, taking the reader from the somber majesty of Spain to the glittering and lethal courts of Flanders, France, and Tudor England. The Last Queen brings to life all the grandeur and drama of an incomparable era, and the singular humanity of this courageous, passionate princess whose fight to claim her birthright captivated the world.

I am not quite finished with the book yet but I feel as though I can recommend it now. The writing is beautiful. The plot is interesting and fresh. The characters are well developed. The author shows a different perspective on the woman known as Juana la loca. I recommend this book espcially to historical fiction lovers. I look forward to reading more books by this author. :)


About the Author:
He holds a MFA in Writing with an emphasis on Renaissance Studies from the New College of California and has taught university seminars on the 16th century. In addition, he travels extensively to research his books. He has experienced life in a medieval Spanish castle and danced a galliard in a Tudor great hall; dug through library archives all over Europe; and tried to see and touch—or, at least, gaze at through impenetrable museum glass—as many artifacts of the era as he can find.
A regular contributor to the Historical Novels Review and Solander, publications of the Historical Novel Society, C.W. is also a dedicated advocate for animal rights and environmental issues. Born in Washington D.C. and raised in Málaga, Spain, he is half-Spanish by birth and lives in Northern California.

I have been so wanting to read this book and am glad to see it on tour...thanks for hosting and for your input!!
Darby
darbyscloset at yahoo dot com

Thank you for being a host on my virtual book tour, Book Lover! Nice review, too; I hope your readers enjoy The Last Queen.

I enjoyed this book. It was so well-written I feel like I can easily still visualize Juana.