The Sword and the Flute by Mike Hamel

Mike Hamel
and his book:
The Sword and the Flute (Matterhorn the Brave Series #1) 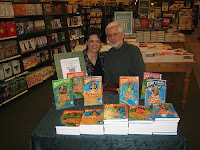 Mike Hamel is a seasoned storyteller who has honed his skill over theyears by telling tall tales to his four children. He is the author of several non-fiction books and numerous magazine articles.

Mike and his wife, Susan, live in Colorado Springs, CO. Their four children are now grown and their two grand children will soon be old enough for stories of their own.

From His Blog's About Me:

I am a professional writer with sixteen books to my credit, including a trilogy of titles dealing with faith and business: The Entrepreneur’s Creed (Broadman, 2001), Executive Influence (NavPress, 2003), and Giving Back (NavPress, 2003). I also edited Serving Two Masters: Reflections on God and Profit, by Bill Pollard (Collins, 2006).

My most enjoyable project to date has been an eight-volume juvenile fiction series called Matterhorn the Brave. It’s based on variegated yarns I used to spin for my four children. They are now grown and my two grandchildren will soon be old enough for stories of their own. 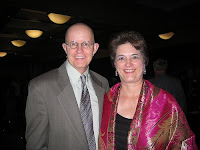 I live in Colorado Springs, Colorado with my bride of 34 years, Susan.

As you read this blog, remember that I’m a professional. Don’t try this level of writing at home. You might suffer a dangling participle or accidentally split an infinitive and the grammarians will be all over you like shoe salesmen on a centipede.

BTW – I have been diagnosed with Diffuse Large B-Cell Lymphoma, an aggressive but treatable form of cancer. 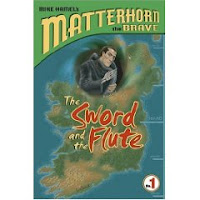 
Aaron the Baron hit the ground like a paratrooper, bending his knees, keeping his balance.

He straightened his six-foot-four frame into a sitting position. In the noonday sun he saw they were near the edge of a sloping meadow. The velvet grass was dotted with purple and yellow flowers. Azaleas bloomed in rainbows around the green expanse. The black-faced sheep mowing the far end of the field paid no attention to the new arrivals.

“Are you okay?” the Baron asked. He looked as if he’d just stepped out of a Marines’ recruiting poster. “We’ll have to work on your landing technique.”

“How about warning me when we’re going somewhere,” Matterhorn grumbled.

The Baron helped him up and checked his pack to make sure nothing was damaged. He scanned the landscape in all directions from beneath the brim of his red corduroy baseball cap. “It makes no difference which way we go,” he said at last. “The horses will find us.”

“The horses that will take us to the one we came to see,” the Baron answered.

“Are you always this vague or do you just not know what you’re doing?”

“I don’t know much, but I suspect this is somebody’s field. We don’t want to be caught trespassing. Let’s go.”

They left the meadow, walking single file through the tall azaleas up a narrow valley. Thorny bushes with loud yellow blossoms crowded the trail next to a clear brook. Pushing one of the prickly plants away, Matterhorn asked, “Do you know what these are?”

“Gorse, of course,” the Baron said without turning.

“Never heard of it.”

“Then I guess you haven’t been to Ireland before.”

“Your great-grandfather won’t be born for centuries yet.”

Matterhorn stepped over a tangle of exposed roots and said, “What do you mean?”

“I mean we’re in medieval Ireland, not modern Ireland.”

“How can that be!” Matterhorn cried, stopping in his tracks. “How can I be alive before my great-grandfather?”

The Baron shrugged. “That’s one of the paradoxes of time travel. No one’s been able to figure them all out. You’re welcome to try, but while you’re at it, keep a lookout for the horses.”

Matterhorn soon gave up on paradoxes and became absorbed in the paradise around him. The colors were so alive they hurt his eyes. He wished for a pair of sunglasses. Above the garish gorse he saw broom bushes and pine trees growing to the ridge where spectacular golden oaks crowned the slopes. Birdsongs whistled from their massive branches into the warm air. Small animals whispered in the underbrush while larger game watched the strangers from a distance.

The country flattened out and, at times, they glimpsed stone houses over the tops of hedgerows. They steered clear of these and any other signs of civilization. In a few hours, they reached the spring that fed the brook they had been following. They stopped to rest and wash up.

That’s where the horses found them.

There were five strikingly handsome animals. The leader of the pack was from ancient and noble stock. He stood a proud seventeen hands high—five-foot-eight-inches—at the shoulders. He had a classic Roman face with a white star on his wide forehead that matched the white socks on his forelegs. His straight back, sturdy body, and broad hindquarters suggested both power and speed. A rich coppery mane and tail complemented his sleek, chestnut coat.

The Baron held out an apple to the magnificent animal, but the horse showed no interest in the fruit or the man. Neither did the second horse. The third, a dappled stallion, took the apple and let the Baron pet his nose.

“These horses are free,” the Baron said as he stroked the stallion’s neck. “They choose their riders, which is as it should be. Grab an apple and find your mount.”

While Matterhorn searched for some fruit, the leader sauntered over and tried to stick his big nose into Matterhorn’s pack. When Matterhorn produced an apple, the horse pushed it aside and kept sniffing.

Did he want carrots, Matterhorn wondered? How about the peanut butter sandwich? Not until he produced a pocket-size Snickers bar did the horse whinny and nod his approval.

The Baron chuckled as Matterhorn peeled the bar and watched it disappear in a loud slurp. “That one’s got a sweet tooth,” he said.

The three other horses wandered off while the Baron and Matterhorn figured out how to secure their packs to the two that remained. “I take it we’re riding without saddles or bridles,” Matterhorn said. This made him nervous, as he had been on horseback only once before.

“Bridles aren’t necessary,” Aaron the Baron explained. “Just hold on to his mane and stay centered.” He boosted Matterhorn onto his mount. “The horses have been sent for us. They’ll make sure we get where we need to go.”

As they set off, Matterhorn grabbed two handfuls of long mane from the crest of the horse’s neck. He relaxed when he realized the horse was carrying him as carefully as if a carton of eggs was balanced on his back. Sitting upright, he patted the animal’s neck. “Hey, Baron; check out this birthmark.” He rubbed a dark knot of tufted hair on the chestnut’s right shoulder. “It looks like a piece of broccoli. I’m going to call him Broc.”

“Call him what you want,” the Baron said, “but you can’t name him. The Maker gives the animals their names. A name is like a label; it tells you what’s on the inside. Only the Maker knows that.”

Much later, and miles farther into the gentle hills, they made camp in a lea near a tangle of beech trees. “You get some wood,” Aaron the Baron said, “while I make a fire pit.” He loosened a piece of hollow tubing from the side of his pack and gave it a sharp twirl. Two flanges unrolled outward and clicked into place to form the blade of a short spade. Next, he pulled off the top section and stuck it back on at a ninety-degree angle to make a handle.

“Cool is what we’ll be if you don’t get going.”

Matterhorn hurried into the forest. He was thankful to be alone for the first time since becoming an adult, something that happened in an instant earlier that day. Seizing a branch, he did a dozen chin-ups; then dropped and did fifty push-ups and a hundred sit-ups.

Afterward he rested against a tree trunk and encircled his right thigh with both hands. His fingertips didn’t touch. Reaching farther down, he squeezed a rock-hard calf muscle.

All this bulk was new to him, yet it didn’t feel strange. This was his body, grown up and fully developed. Flesh of his flesh; bone of his bone. Even hair of his hair, he thought, as he combed his fingers through the thick red ponytail.

He took the Sword hilt from his hip. The diamond blade extended and caught the late afternoon sun in a dazzling flash. This mysterious weapon was the reason he was looking for firewood in an Irish forest instead of sitting in the library at David R. Sanford Middle School.

Email ThisBlogThis!Share to TwitterShare to FacebookShare to Pinterest
Labels: Mike Hamel, Teen First, The Sword and the Flute

I don't know how I managed to miss that one on the list of offerings. It sounds right up my alley. I'm going to go add it to the wish list. Thanks, Brittanie!