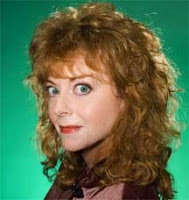 Brandilyn Collins is known for her trademark Seatbelt Suspense®. She is currently working on her 20th book. For chances to win free copies of her work, join her Fan Club on Facebook. Here’s what Brandilyn has to say about why she wrote Dark Pursuit:

In John Milton’s Paradise Lost Satan’s followers, kicked out of heaven, boast about storming the gates and reclaiming their territory. Beelzebub scoffs at their boasting as merely “hatching vain empires” and suggests a different revengeful scheme: seduce mankind away from God. So Satan visits the Garden of Eden to teach humans the very thing he and his cohorts have learned to be futile—the dark pursuit of hatching their own vain empires instead of following God. He presented man with this “gift” of death, disguised as life. And man fell for it.

Upon this theme of man’s fall and spiritual blindness, I created the characters and events in Dark Pursuit. The story clips along at a fast pace, with much symbolism running underneath.

Novelist Darell Brooke lived for his title as King of Suspense—until an auto accident left him unable to concentrate. Two years later, reclusive and bitter, he wants one thing: to plot a new novel and regain his reputation.

Kaitlan Sering, his twenty-two-year-old granddaughter, once lived for drugs. After she stole from Darell, he cut her off. Now she’s rebuilding her life. But in Kaitlan’s town two women have been murdered, and she’s about to discover a third. She’s even more shocked to realize the culprit—her boyfriend, Craig, the police chief’s son.

Desperate, Kaitlan flees to her estranged grandfather. For over forty years, Darell Brooke has lived suspense. Surely he’ll devise a plan to trap the cunning Craig.

But can Darell’s muddled mind do it? And—if he tries—with what motivation? For Kaitlan’s plight may be the stunning answer to the elusive plot he seeks...

This is a gripping suspense novel from one of my favorite authors. I read it in one night. I loved her Kanner Lake Series. This book had it all: great characters and unique storyline. I definitely recommend this book and Brandilyn Collins other books. :)

I've heard wonderful things about her books. It's great to know she's a favorite of yours.