An Irish Christmas by Melody Carlson 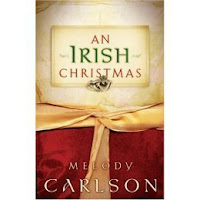 "I still faulted myself with the fact that I had never been over the moon for Hal…. I'd been the best wife I knew how to be, and yet, in my mind, it was never enough. Never equal to what Hal poured out over me…. And with him gone now, I felt even more like a failure--a phony. And I feared this shroud of guilt would follow me to my grave and perhaps even haunt me thereafter."

It is the 1960s and Colleen Fredericks has lost her husband to a heart attack. Her son Jamie is so supposed to be in college getting a business degree but has a big secret he has been keeping from his parents. He had already made clear to his parents he did not want to take over the family shoe store so when his father died his mother had to take over. It is way too overwhelming to her so she ends up selling it without telling Jamie because she has had little contact with him of his choice.

He ends up coming home and turns it on her to hide his secret and the guilt that he feels over it. Mother and son coexist but Colleen feels her son drifting away and he talks of joining the military so she plans an Irish Christmas. They go on a two week trip to Ireland right at Christmas time. Colleen has a really big secret she has been keeping from her son his whole life. It is in Ireland that she hopes to tell him about it. There is not a lot of Christmas in the story but it works out okay. You really cannot tale it is the 1960s except for the mention of JFK's killing.

The setting is beautiful from the author's descriptions of Ireland. I could hear Irish music in my head. This is a wonderful story of love, redemption, forgiveness, and grace. I highly recommend it. :)